Gareth has a problem. He got expelled. Now he and his twin brother, Morgan, have to start over at an artsy new private school, and it’s all Gareth’s fault. Not to mention Morgan’s crippling social anxiety and Gareth’s resting jerk face aren’t making them any friends, and their father is furious with him. Gareth could live with this, but Morgan’s mad at him too, and Morgan is the only person alive who can make Gareth feel guilty.

Good thing Gareth has a plan. Cute, bubbly Felix, a student at their new school, has a crush on Morgan, and they both want to act in their school’s production of Midsummer Night’s Dream. Gareth figures it’s the perfect way to help Morgan come out of his shell and set him up with Felix. Then, maybe Morgan will forgive him, and Gareth can go back to not caring about anything or anyone.

But Gareth has another problem. He’s been cast as Oberon, and Felix is Titania. Oh, and Morgan doesn’t like Felix back. And maybe Gareth is enjoying the play and making new friends and having a good time at his new school. And maybe—just maybe—he’s got a crush on Felix. Can Gareth keep up his tough-guy act long enough to repair his relationship with Morgan, or will Felix get caught in the fallout of Gareth’s dumb schemes?

Everything started when I punched a guy in the face, but I only realized this was more than a regular Tuesday once my twin brother Morgan got home from school looking like he’d been hit by a truck.

Not literally. Morgan resembled the guy on the cover of a romance novel—not Fabio, the Twilight knockoffs, where they were angsty instead of buff. Morgan’s hair was always windswept, except when he pulled it back as per the school dress code. While our school had a dress code, at least it was gender neutral, so anyone could wear whatever they wanted as long as their skirt hit below the knee and their hair was kept out of their face.

Morgan’s hair is always kept out of his face, is what I’m saying.

I was hoping word hadn’t gotten around school, but what a stupid hope. Morgan was ashen. I got to my feet. “Morgan—”

He shook his head without changing his expression.

Crap. I tried to stand still as Morgan went through his getting home ritual: shoes placed in a neat straight line next to the door, tie loosened but not taken off, laptop removed from bag, bag hung on the hook next to the empty one where mine belonged. I put my hands behind my back so he wouldn’t see me digging my fingernails into my palm.

Morgan finished and turned to me. I couldn’t read his expression. “So what happened this time?”

I tried to make my mouth work. But for one thing, I had a bad feeling Morgan already knew the answer. For another—

If he didn’t already know, explaining would be impossible. This went deeper than being dumb and teenage and angry. This was about Morgan and his nerves and me protecting him the only way I knew how. If I could explain it out loud, I wouldn’t have been in this mess. I could have talked things out with Warren Beauregard III (really, truly his name in the year of our Lord 2016) the way Sesame Street taught me, and we would sing a song, and everyone would have gone home happy after learning about the letter of the day.

But before I could figure out how to put it into words, my father came downstairs.

My father—excuse me, Dr. Trevor Lewis, PhD and some other fancy letters—was a professor of Welsh literature. He spent most of his time buried in books written in a language barely anyone spoke, writing papers seven other people would read. Whenever he tried to tell me about it, my soul left my body from sheer boredom.

I didn’t see him much. In order to focus on his research, Trevor taught night classes, which meant all the good people working full-time jobs and going through school snored their way through his English 101. Therefore, he was at home while I was in school, and I was at home while he was at school. It worked well. I didn’t have to see him and remember we looked alike and I hated it, and he didn’t have to see me and remember the family disappointment.

“Let’s sit in the parlor, boys.” His voice was cool.

The change of scenery wasn’t for anyone’s comfort; the furniture was so old it doubled as a torture device. Morgan and I took our usual spot on the couch, Trevor in the chair across from us. Morgan chewed on his lower lip. I wanted to do the same, but I also didn’t want Trevor to see he had me over a barrel.

“The principal decided to avail me of a number of things about you, Gareth,” said Trevor, after a long, long minute of staring at me. He still hadn’t raised his voice. “He said you are, in most respects, a brilliant student. A leader in class discussions, consistently high achieving on standardized tests, and well liked by your teachers. I was aware of all of this.”

I did not relax. Before everything else, Trevor was a rhetorician. He was not reassuring me; he was laying out background before he launched into his thesis. According to family legend, when he defended his dissertation, the evaluators only asked one question apiece because his argument about whatever he studied was so watertight.

“What I did not know is you have also been consistently on the verge of expulsion from the moment you started high school. I don’t see the point of going into detail of the reasons. I’m sure you’re aware—swearing, uniform violations, lashing out at other students.”

The expulsion part was news to me, which was not going to help my case.

Trevor waited, not to see if I wanted to respond. He was pausing for effect. “And it has only been by the grace of the aforementioned good qualities and my not inconsiderable donations to your school that you have not been run out for conduct unbecoming a member of their academy.”

I bit my tongue. Literally. It hurt. Sometimes, I appreciated Trevor’s frankness. Take when he talked about college. He always said, “I expect both of you to attend either the school where I teach or the University of Wisconsin, unless you get into an Ivy League college.” It might sound controlling, but I knew exactly where I stood with him—in the garbage.

“You’re getting kicked out?” Morgan asked, as though I should have led with it when he came in the door.

“I guess, but I just found out too.” I didn’t even know my school expelled people. Then again, I was the only kid ever written up for fighting on school grounds.

Morgan stiffened like we were going over the first drop on a roller coaster, only there was no track at the bottom to catch us. “I can’t stay there by myself.”

Now that was news to me. Among other things, Morgan was valedictorian, first chair violinist in orchestra, and student council secretary. (He’d be president, but then he’d have to talk.) All the teachers thought he was God’s gift to academia, and he’d been fielding college recruiters since we were in eighth grade. And everybody adored Morgan. Girls wanted to bang him, guys wanted to be him/possibly also bang him, nonbinary people high-fived him, et cetera. I wasn’t exactly an outcast, but I wasn’t anyone’s first choice for gym, either.

Trevor’s expression was unreadable. Behind his glasses, his eyes were the color of a freezing winter sky. My father had never been cuddly, but he used to talk to us more, before my mom killed herself four years ago. Suicide should have been the low point, but things only went downhill in our family from there. After the funeral ended and all the flowers were thrown away, we never talked about her again. I hadn’t bothered trying, but Morgan had, and Trevor dismissed him. Not in so many words, maybe, but we got the hint.

Anyway, as long as Morgan was calm and under control, he and Trevor had long and involved conversations about books and crap. But the second Morgan faced something more complicated than precalculus, Trevor was out the door faster than blinking, leaving Morgan alone with his deep-breathing exercises. And me. I always cleaned up the mess, whether or not I made it.

To be fair, I usually made it.

I got to my feet, one hand clenched in a fist. I wasn’t going to hit Trevor—no use. It wouldn’t get a rise out of him. But the pain helped me concentrate so my voice would come out calmly, the same way it did at fancy dinner parties when one of Trevor’s too-rich friends asked me a question that drove me up a wall. I knew Morgan hadn’t meant to say anything out loud, nor would he appreciate it if I answered him right now. So I put on my best Trevor face and pretended Morgan wasn’t hyperventilating beside me. “Well, this is all pretty shitty. When do I find out?”

Trevor’s expression hadn’t changed an inch; he might have been staring at one of the insipid paintings hung on the wall. “You’ve been suspended for the rest of the week while they decide. In the meantime, I suggest you research alternative options. I have enough work preparing for midterms.”

I bit the inside of my cheek hard enough to taste blood so I wouldn’t answer. Morgan was about ready to barf all over the fancy Persian rug, but he almost always was. I couldn’t tell if it was worse than usual.

“You wanna help me search?” I asked. If I didn’t give Morgan some kind of out, he would sit there until the end of time, caught in his own head.

Morgan stood, jerkily. He nodded at Trevor and followed me upstairs. 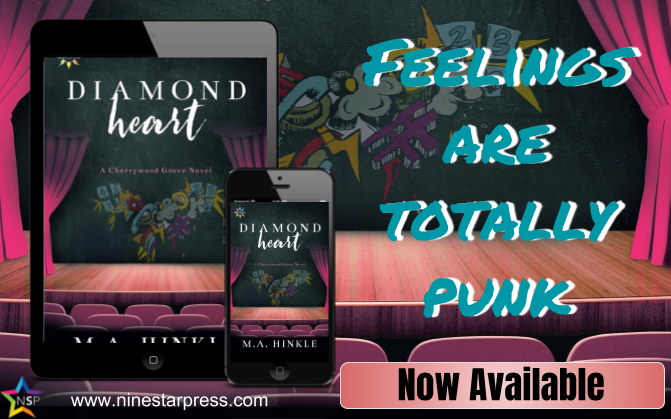 M.A. Hinkle swears a lot and makes jokes at inappropriate times, so she writes about characters who do the same thing. She’s also worked as an editor and proofreader for the last eight years, critiquing everything from graduate school applications to romance novels.