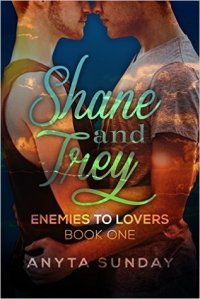 Sorry, this was just a weak story. Boy falls for his sister’s boyfriend. I’ve read that, it’s a decent trope. Sister’s boyfriend turns out to be gay. Ok, I’ll go with it. They are paired up as roommates in college and almost immediately fall into a relationship. Blah.
First, the book started out with Shane and his twin sister June being best friends who would do anything for each other. Guess what, even though they broke up, he shouldn’t have hooked up with her ex.
Second, June is upset but “understands”? Nope.
After they got together, it just turned so sappy. There was a whole spin off story with one of Shane’s friends and his boyfriend and then his father. Trey has some big family secret (although, pretty easy to suss out), and they are “away” at college in dorm rooms but are only 30 minutes from home?
. They were so cutesy. And they seemed to know exactly what to do with each other even though neither had any experience. Where was the awkward? It was all just kind of a mess for me

All buy links or pre-order links:

Shane is a little bit screwed, he’s just started college and stuck rooming with that bastard Trey. His sister’s boyfriend. His sister’s damn fine boyfriend. Uh-oh. This so wasn’t going to happen. But try as he might, there’s just a little too much to ignore between the two of them…

Each of the four fun & sexy gay romance novels in the “Enemies to Lovers” series can be read as a stand-alone and in any order.

Read what Anyta Sunday has to say about SHANE AND TREY:

Enemies to Lovers – who doesn’t love this trope?!?

I really enjoy romances that pair guys that can’t stand the sight of each other… but then, slowly, realize there’s more to the other…

My “Enemies to Lovers” series is full of these stories, and right now you can grab the first book, “Shane and Trey”, for FREE!

This classic Anyta Sunday new adult gay romance has over 70 Amazon reviews and over 2000 ratings on Goodreads.

I took the letter and worked my pinkie under the flap. Who would my roomie be? I’d given a pretty detailed profile of myself in the application. The guy was surely going to have some of the same interests as me, right? I mean, they had a computer system for this stuff.

In a sudden burst of excitement and confidence I winked at June. “Jeez I hope he’s hot.”

She glanced around my room and gave a small laugh. “Well whoever he is, he’s lucky. You’d be a good roomie. So tidy.” She gazed at her letter again. “They should come with a profile picture. Or at least a last name to Google them. Shoot. I hope Sara will be nice.”

“Don’t worry, she will be. And you can always come hang with me if you don’t like her.”

I snorted, scanning over the letter. “Not gonna—”happen, June, I was going to finish. Until I read my soon-to-be-roomie’s name.

I frowned, my insides sinking toward my toes. Surely there were like, loads of Trey’s, right? I mean what fucked up coincidence would it be to end up rooming with my sis’s boyfriend? Oh, please don’t let the world be that cruel.

I swallowed and managed a fake grin. “Funny. His name’s Trey.”

Near the end of the movie, Trey took another handful of chips. Actually, it might have been the rest. But he balanced them poorly and one fell onto the bed between my legs. In a movement so fast it may as well have blurred, Trey stuffed the chips in his mouth and shoved his hand down the tiny triangle of space in my lap.

I sucked in a hard breath, holding it as Trey moved about trying to find his chip. I should have found it for him, or moved or something, but I’d frozen. There was only one muscle able to move now, and I was doing my best to avoid that happening. Trey was still glued to the screen, like he had no real idea what he was doing. Just a voice in his head whispering for him to find the chip. That delicious crunchy chip. Fucking chip!

Finally he found it and came out, managing to brush his hand over my inner-thigh as he did. Bastard. I scowled as he brought the chip to his mouth and began nibbling it. Nibbling it. Like, what was this guy doing to me?

Was it possible to wish for scary Trey back? The Trey that made me want to be best buddies with my dictionary. Because, in all honesty, I think that might have been easier to handle.

As the credits rolled up, Trey rested a hand on my shoulder. I jumped a bit, and he met my gaze directly.

Trey spoke, dropping his hand suddenly, like before. “Guess it’s about time to get ready for that date of yours.”

Syd. Shoot! I sprung off his bed and checked the time. I had ten minutes before I was meant to meet him. I shrugged out of my T-shirt, quickly folded it, and slipped on a causal black shirt. Patting myself, I calculated what else I needed. I turned around, and Trey held my wallet out to me.

I shoved it in my pocket and found my keys, slipping those in behind my phone. “Right. I gotta run.”

Trey opened the door wide, but as I passed him, he stopped me, one hand curled around my wrist. His warm breath tickled my neck, and, in the lightest of whispers, he said, “Don’t sleep with him.”

We got inside no problem. Though it crossed my mind it was strange I was following him. I’d sort of just assumed we’d hang out. But what if he was wondering what the hell I was doing shadowing him through the door?

Was that frown to say he also thought it was weird I was standing here when my house was five minutes away?

Trey hesitated, and then started up the stairs. “I thought maybe Mom would be up.”

“It’s late,” I said. “Maybe it’s best we don’t see her until morning.” Only a moment after the words came out, I froze on the stairs, as did Trey. Had I just suggested I’d be staying over? We’d barely hugged and now I jumped to sleeping over? Jesus. I wanted to knock my head against something hard. “I mean,” I said, knowing I should just shut up. But I couldn’t stop myself. You’re making this worse! “I’ll be seeing her on my way to pick you up tomorrow. Or not. Or—”

Trey twisted suddenly, and then I was pinned against the wall. Hot lips on mine. Hard body pressed against me, tight, solid.

I hiccupped on a breath. Like, what just happened? I stared into Trey’s gaze still so close.

I clapped the phone shut, Dad’s first words still ringing in my ears. How’s my son? Living up Saturday night, drunk and partying? And then his laugh. Raucous. Like a freaking bad omen. I shivered—couldn’t help it, and sat on the end of my bed where I’d wandered during the two minutes and twenty-nine seconds we’d spoken.

Trey stared at me, brows furrowed together, his mouth a straight line. Was he waiting for me to say something? And what? Yeah, that was my dad, we don’t get on, but you probably heard that in my tone, anyway, let’s not talk about it. I reached over and slammed the phone on my bedside table. Stupid phone. Stupid me for not having looked at the caller ID. Damn, what a way to ruin the mood.

Trey sighed and propped himself on one elbow, on his side. “You can’t choose ’em. Right?”

I mirrored his sigh, but just the way he’d said that—that touch of humor to lighten things up—it was like he knew exactly how to calm me down. The corner of my lips twitched. “If only.”

His eyes softened before his lips corresponded in a smile. “But you know who you can choose.” He beckoned me over, which was hardly necessary. As soon as the words had slipped from his tongue, I was on my way.

Like I’d wanted to do for ages, I pounced onto the mass of pillows next to Trey. He looked startled a moment before cracking up. “Fuck, for a second I thought you were doing some type of wrestling move.”

I grinned. “I was, but to the pillows. Be pretty stupid of me to do it to you. I may not be great at math, but I know my chances at survival would be slim.”

That had him laughing louder. How wonderful it was to hear: boisterous, unrestrained, hearty. Quite fulfilling—quite? No, more than that, incredibly. And just like that Dad drowned from my mind. Everything, except for Trey, simply vanished. Didn’t matter.

Lightly, I touched his chest and felt his laugh as it bubbled underneath my hand. It spread through me, highly infectious, until I was laughing too. We didn’t stop, even when we’d forgotten what was funny and stomach muscles hurt and limbs convulsed. It just felt so good. Every bout seemed to reflect our excitement and nervousness, and cracked through any awkwardness we had being together.

A bit about me: I’m a big, BIG fan of slow-burn romances. I love to read and write stories with characters who slowly fall in love.

Some of my favorite tropes to read and write are: Enemies to Lovers, Friends to Lovers, Clueless Guys, Bisexual, Pansexual, Demisexual, Oblivious MCs, Everyone (Else) Can See It, Slow Burn, Love Has No Boundaries.

My books have been translated into German, Italian, French, and Thai.

Join our giveaway: Prize: 2 e-box sets of the “Enemies to Lovers” books!