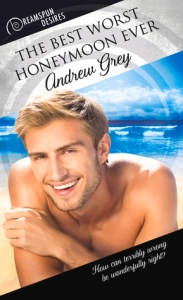 Tommy is a wealthy game designer who is so happy to be getting married to the man of his dreams, Xavier.  All the plans are made, the expensive honeymoon is booked and he’s anxiously awaiting his groom.  Except when said groom shows up, he has the hangover from hell and some incredibly upsetting news.  “I can’t do this.  The wedding and everything you’ve got planned.  It’s too much.”  And so Tommy is left at the altar to explain to guests why there will be no wedding.  The only saving grace is Tommy has his best friend, Grayson, and Grayson’s son, Petey there for moral support.

When Tommy decides to take Grayson and Petey on that expensive honeymoon he blocks Xavier’s number and tries to concentrate on healing, at least a little.  They are at a luxury resort on an island, a trip that Xavier wanted, not the water-hating Tommy.  It seems Tommy had done so much trying to make Xavier happy, it was heartbreaking.  “Because I wanted him to love me.  Because I was so desperate to be loved by someone, and not be alone, that I didn’t see that Xavier didn’t really care and was only interested in me for …what I had.”

For his part, Grayson has had feelings for Tommy for a while but he’s never let Tommy know.  At one point he was going to let Tommy know but that was when Tommy met Xavier, so Grayson let it drop, living with being in the friend zone.  He also has to worry about Petey.  His last boyfriend, Jeffrey, was first a friend who was close to both he and Petey, but after they broke up he deserted both of them and it was hard on Petey.  He doesn’t want that to happen again.

I liked that they took Tommy out of his comfort zone in the water and got him out doing things.  There is a twist with Xavier that shows Grayson’s protective side.  A sting from paradise happens and I like the fact that their feelings and relationship were not based on that.  It didn’t take a near miss for them to know they cared.

I had questions about some of this book, however.  Xavier claims at one point he has nothing but his job and his car, yet he was able to take an expensive flight to Bonaire.  Where did that money come from?   He says that he realized that he wouldn’t have a good marriage because Tommy was always working and so got cold feet but he charged upwards of three thousand dollars on Tommy’s credit card.  The biggest issue for me, though, was that even though Xavier didn’t love him, Tommy had clearly loved him, so the moving on to Grayson after just days seemed too quick.  He says at one point, “It feels like Xavier left me yesterday, and it hurts, Grayson.  It really hurts.”  That was just a week after the wedding-that-wasn’t, so of course it hurts.  I know that Xavier being a douche helped things along but it did seem too fast.

Supporting characters such as Petey and Aunt Gin, were awesome.  Aunt Gin, that’s the woman I want to be and if I can’t, I want her in my corner.  She made me so happy.   “Just like that she had switched from aunt to family lawyer and all-around advice giver.”   She is the reason Tommy wasn’t more financially hurt by Xavier.

Cover Art by Bree Archer is a little nondescript.  A blond smiling man with the ocean in the background.  I’m not sure if he is supposed to be Tommy or Grayson.  It’s a pretty cover, just not really definitive as to the story.

How can heartbreak turn into happily ever after?
Tommy Gordon is all set for happily ever after—until heartbreak strikes when his husband-to-be leaves him at the altar. In a bid for distraction, his best friend, Grayson Phillips, suggests he takes advantage of the luxury honeymoon anyway! But the last thing Tommy wants is to go alone, so he invites Grayson and his son, Petey, along.
Beautiful Bonaire lends itself to romance, and along with close quarters, relaxing on the water, and a matchmaking kid, Tommy and Grayson soon find themselves closer than ever… and considering more, much to Grayson’s delight. But before they can plan the best best honeymoon ever, dark clouds descend in the form of Tommy’s ex and a sting from paradise that could ruin everything.

Tommy took a deep breath and went to the door. Grayson stopped him and pointed to one of the chairs. Tommy sat down, trying not to hyperventilate.

“Xavier, what are you doing?”

“I need to talk to Tommy,” Xavier said, sounding like shit.

Grayson turned to him, and Tommy lifted his gaze, nodding. Clearly there was something wrong and he needed to deal with it. Whatever plans he’d made were most likely out the window anyway. He certainly hadn’t envisioned a drunk, hung-over groom.

Grayson stepped back, pulling open the door, and Xavier half stumbled in, looking worse than Tommy could ever have imagined.

“What the heck happened?” He hurried over, but Xavier stopped him by putting up his hand. “Are you sick?”

“I’m fine,” Xavier managed to say, slowly sitting himself down. “Gary and I went out as sort of a last hurrah, and we overdid it.” He raised his face, and Tommy got a good look at his glassy eyes.

“Okay. We still have time. Grayson and I can help you get ready,” Tommy said gently.

Xavier shook his head of thick black hair, and then his deep brown eyes cleared of some of their rumminess. “I can’t do this. The wedding and everything that you’ve got planned. It’s too much.” Xavier sat back as all the oxygen seemed to leave the room. Tommy’s head grew light, and fuck it all, he was going to faint, but Grayson was there, holding his arm. “You want more than I think I can give.”

“You waited to tell him now, twenty minutes before the wedding?” Grayson yelled. “You bastard!”

“I’ve spent the last few days trying to think about what I was going to do.” Xavier hiccupped, and his alcohol breath was enough to knock over an elephant. “I thought if I drank and told myself that I loved you and that I really wanted to do this, everything would be all right. But it isn’t true, and I can’t go through with this.” Xavier got to his feet, half stumbled toward the door, and pulled it open. “I’ll see you around.” He left and closed the door with a click after him.

Tommy watched, openmouthed, too stunned to move. The room had turned bone chillingly cold. “What did he just tell me? That he didn’t love me?” He couldn’t feel his fingers, and then his hands and feet went numb. He tried to think of what he was going to do, but nothing at all came to mind.

“Uncle Tommy,” Petey called as he raced into the room, practically barreling into him. “I saw Uncle Xavier and he looked sick. What’s wrong?” Petey looked at him and then turned to Grayson.

“Uncle Tommy isn’t going to get married. Xavier chickened out and wasn’t man enough to tell Uncle Tommy until right now.” The anger in Grayson’s voice simmered just below the surface. “What he really needs is a hug.”

Petey climbed up on the chair, stood up, and hugged Tommy, and Tommy closed his eyes, willing the rest of the world to go away.