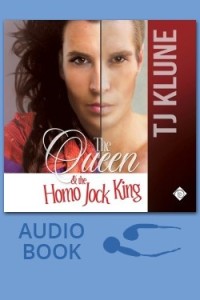 Do you believe in love at first sight?

Sanford Stewart sure doesn’t. In fact, he pretty much believes in the exact opposite, thanks to the Homo Jock King. It seems Darren Mayne lives for nothing more than to create chaos in Sandy’s perfectly ordered life, just for the hell of it. Sandy despises him, and nothing will ever change his mind.

Or so he tells himself.

It’s not until the owner of Jack It—the club where Sandy performs as drag queen Helena Handbasket—comes to him with a desperate proposition that Sandy realizes he might have to put his feelings about Darren aside. Because Jack It will close unless someone can convince Andrew Taylor, the mayor of Tucson, to keep it open.

The foolproof plan is this: seduce Darren and push him to convince his father to renew Jack It’s contract with the city.

I loved this story just as much as I have every TJ Klune story I’ve read.  Sandy is absolutely hilarious, if not completely stubborn at the same time.  Seeing all the characters from the previous book helps to connect with the story even more.

You can’t help but connect with Sandy and feel exactly how he did.  I could see the other characters emotions through Sandy’s eyes even when Sandy didn’t seem to see them himself.  I loved Darren, he couldn’t help but take anything he could get when it comes to being with Sandy since he feels he doesn’t deserve him.  I would love if TJ continues this series and we get to see Cory find someone.

Cover art by Reese Dante is perfect for this story.