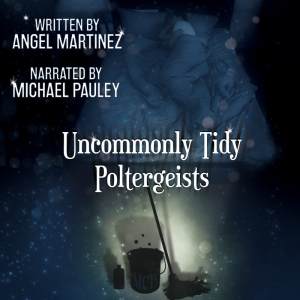 Jack’s arrival crushes Taro’s hopes of a dashing Van Helsing-style hero. Instead of an invincible hunter, he gets Ichabod Crane. As the paranormal puzzles multiply and Jack begins to suggest the entity might not be a ghostly one, Taro adds a budding friendship with Jack to his pile of anxieties. It’s a race to see whether Taro’s poltergeist or his relationship with the obviously-not-ace Jack will reach maximum strangeness first.

Uncommonly Tidy Poltergeists never pulled me in. Taro’s self-reprieves take too much of the initial part of the story for me to feel compelled by his story. The initial meeting with his family and the subsequential travels were rushed and almost identical. I understand the author was trying to set the plot of the story, but I kept waiting for something interesting to happen.

The trips were almost like a list of places he visited were the same “magical cleaning” happening. He was always tired and lonely but the minimal interactions with others and his internal dialogue didn’t make me want to know more about his situation or his past.

Getting to know Jack was hard too; especially from Taro’s perspective. Perhaps a little more information was needed to sympathize with him and their relationship. Their main conversation about their differences was a bit awkward and it was hard to believe in them and their future.

Overall, it is a nice story, with the author’s natural fun and quirky writing. It just not great.

I didn’t enjoy Michael Pauley’s narration. Yes, the voices were distinct but it was more of a performance than a narration. It was hard to get into the story without feeling as if the whole thing was being forced. It had an unnatural quality that made me want to take breaks when listening to the story.

The cover by L.C. Chase is a cute representation of the story’s main plot and it has a ghostly feel that fits well.