Zachary Hamilton comes from a family endowed with special gifts.  He has them as well and it has cost him everything.  Zachary doesn’t want his gift and his family doesn’t think he should have it  either.  To “return it” is to die so Zachary and his love, Nick, have been on the run  from the Hamilton family since they were teenagers.  Living as fugitives has been hard and each time they think they are safe, the Hamiltons find them yet again.  Then Zachary and Nick land in Los Angeles, California and their luck seems to change.  A benefactor appears out of the blue, offering them a store for their antique business and a place to call home.  And for a while they are happy.  Until a bullet shatters their lives and Nick dies in  Zachary’s arms.

Zachary is consumed by his grief, refusing to leave his apartment until Dave, his assistant in the shop, pulls him out of his house and back into their shop.  As Zachary tries to determine his next step regarding his family, he receives a phone call from a lawyer.  It seems that Mark Castle, a famous movie star from the 50’s has died and left Zachary the entire Castle estate, including an ancient relic.  This powerful token will change Zachary’s life and those around him if Zachary has the courage to use it. And so begins A Token In Time.

Well, what an amazing story.  I read it twice before sitting down to write this review, not because I needed to but because I wasn’t ready to let  go of Zachary and Marc and all who come with them, past and present.  I have been a fan of Ethan Day’s books but A Token In Time represents a departure from the light comedic fiction I have come to expect from him.  A Token In Time fluctuates between contemporary and historical romance under an umbrella of the supernatural and it does so beautifully.  The story of Zachary Hamilton and Marc Castle flows like a Mobius strip from the year 2008 back to the 1950’s and around again and never hits a false note.

Ethan Day has certainly done his research into life in the 50’s and it shows without it coming across like an information dump.  When Zachary (and the reader) land in Los Angeles circa 1958, the surprises are endless and sometimes very funny.  Stereophonic Hi Fi is new and wonderful, Coke is Coke, and gas “costs a friggin’ quarter”.  And the lack of the internet and Star Bucks come as an unhappy surprise to a young man accustomed to the everyday pluses of life in 2008.   Oh it’s so great to tag along with Zachary as he visits the West Hollywood Sears store and has to pick out pants that most certainly aren’t low riders!  Ethan Day’s deft touch with comedy is everywhere without overwhelming the dark and angst filled romance behind A Token In Time. Ethan Day brought the 50’s vividly back to life so much so that I was reaching for the iTunes store before the end of the book to recapture the sounds of the times.

And lets talk characters shall we?  I have loved Ethan Days previous creations but the characters he has brought to this story are remarkable and have so much depth to them as to be unforgettable.   Zachary is a complicated young man, beautiful, gifted, and still so full of joie de vivre through all his pain. But he doesn’t fully come to life until he falls onto the sand and into 1958. Free from the mechanisms of his family, he starts to blossom and the love affair between Zachary and the reader snaps to life as well.  Marc Castle too is rendered here in gorgeous Technicolor from his golden tan to white movie star smile.   We come to love him dearly the more we get to know him.  And don’t get me started on Jonathon Reed, Max, Maddie, and  Leo.  The author keeps adding characters so real, so damn lovable that I wanted to hold onto them for dear life and not let them go. I am going to beg here, Ethan Day.  Please consider giving us Jonathon and Max’s story.  Pretty please?  With fuzzy swinging dice on top?

And lurking behind all of this is a constant menace, the dark we hide from, the monsters we know are under the bed.  Skillfully, the dread increases, the anxiety ramps ups a notch after notch much like the music from the shower scene in Alfred Hitchcock’s Psycho. We know where the danger coming from in both eras but not how or when it will strike. And strike it does in stomach churning, heart stopping ways.  Mystically, brutally rendered evil to balance the joy and love that infuses the rest of the story.

So why not give it 5 stars? Only because of the way the story begins.  A minor quibble but it took me a little while to get accustomed to the manner in which Zachary and Nick’s back story is told.  I found it a little jumpy at the beginning, but it soon settles itself out and the reader gets sucked in this wonderful page turner not to be let out until the very last word of the epilogue.  And you will love the end.  Really, you will.  And now I will say no more. 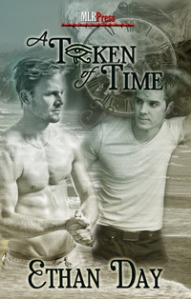 Cover:  Winterheart Designs did the cover and they did an outstanding job of it.  It looks like it came right off the book jacket of a novel from the 50’s, both in color and illustration.  It really couldn’t be more perfect. I would love to have a copy of it for myself, framed and hung on the wall, it’s that good.

Available from MLR Press, Amazon and ARe.