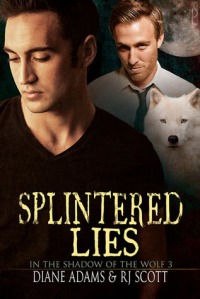 When cop Joe Christie’s shifter wife and unborn child died, a part of him died with them.  Since their deaths, he has just been going through the motions of life, running on his own in wolf form and avoiding all former friends and partners, including Nick.  That would be Nickolas Alexander, Joe’s former best friend and lover before his marriage to Mara.  Once Joe married Mara, Nick stepped back from their lives and away from Joe.  But Nick has continued to love Joe all through his marriage to a woman that he grew to like as well. And when Mara and their unborn child was killed, Nick stood by Joe as the shattered man tried to cope with their loss and failed.

One piece of information about the ongoing investigation into criminal acts against the shifter population shocks Nick to the core and then galvanizes Joe into action.  Mara and Joe’s unborn child were the recipients of an illegal drug and unknowingly part of a criminal experiment on female wolf shifters and their babies.  They were killed to get rid of evidence of the experiments not in a car accident as Joe and the others had been told. Only two others of their group know the truth and when Nick tells Joe how Mara really died, Joe explodes in rage, determined to find and kill the people responsible.

With Rob, Sam, Doug, and Jamie to help, Nick and Joe set out to find the truth behind the torture, kidnapping and deaths of the shifters.  Nick tries to keep his love for Joe quiet but working next to him in the investigation is unbelievably hard.  And Joe is also finding  that the love and lust he thought he had buried when he married Mara is coming back in full force.  Will his guilt and love for his dead wife make any future with Nick impossible?  And will the conspiracy to kill wolf shifters mean their deaths as well.

Splintered Lies (In The Shadow of the Wolf #3) completes the investigation into a wolf shifter conspiracy that started with Shattered Secrets (In The Shadow of the Wolf #1) and continued in Broken Memories (In The Shadow of the Wolf #2). All the couples from the first two stories are back as well as the auxiliary characters who are now the main characters here, Joe and Nick.  There is a conspiracy aimed at the destruction of wolf shifters.  Shifters have been captured, kidnapped and tortured, experimented on and then killed but the investigations into each case has proven that the leadership behind the criminal acts goes higher than anyone had anticipated, reaching into the top levels of the government itself. Authors Adams and Scott more than accomplish their goals in giving the reader a horrifying mystery to solve as each new angle or case makes the conspiracy behind it even more terrifying in scope.  Before we had abused wolves who can’t or won’t shift back, cases of multiple rapes and prostituted shifters, now it is revealed that pregnant wolf shifters and their fetuses have  been the subject of gruesome experiments.  And when those experiments have failed, the subjects have been deposed of, including Mara and their unborn child.  The subject matter alone here raises the horror factor considerably and thankfully most of the experimentation has been left to the reader’s imagination.  Again, this is such a huge element of the series and it is very well crafted.  Splintered Lies brings the hunt for the people behind the atrocities to a conclusion that is 99 percent satisfying as not all of those who participated are counted for at the end.  Are they setting us up for another book?  It would seem so.

More problematic are the characters of Joe Christie and Nick Anderson.  Joe is lost in his grief over the death’s of Mara and their child. And all the emotions he is going through seemed grounded in reality.  You can feel how shattered he is,  how his grief has immobilized him in his loss. But when it comes to the backstory of his and Nick’s earlier relationship, you want to know what was the pivotal point that made Joe choose Mara over his very real love for Nick.  Over and over Joe reveals how guilty he felt over dumping Nick for Mara and that Nick still appeared in his dreams but the reader never understands why Joe felt the need to make the choice he did and that serves as a huge disconnect between the reader and this character.  How can the reader mourn the loss of Joe and Nick’s relationship is it never feels completely real to begin with? Then there is Nick who in his love for Joe steps back and away from the man he loves.  He says he understood Joe, but again, we never feel either his passion for Joe or the bargain he made with himself.  Nick just comes across as way too passive with regard to his past with Joe.  Ultimately, while the confused sexual tension between the men had a certain gravity to it, the rest of it felt flimsy in its construction.  So while I liked the characters I never bought into a loving connection between them and the story suffered from it.

An intriguing angle I wish had been more throughly explored was the idea of  shifter assimilation versus shifter integration into human society. Sam posed that part of Joe’s behavioral problems was that he was trying to act “human”, from his method of dealing with his grief to crowded human conditions.  I loved this concept.  It came about  very late in the book and has so many great elements to it, so many places you could go with it that I wish it had been the focus of the story or  maybe the central idea behind its own series.  Again I felt like it was given short shrift but maybe that’s on purpose.  I certainly hope so because an exploration of what it means to be a wolf shifter in a human society could certainly benefit from another great perspective or even two.

So if you love shifters, add this series to books that you should read.  I adored two out of the three couples but the rest of the book has so many good elements that I don’t think it should be missed either.

Here are the In The Shadow of the Wolf books in the order they should be read in order to understand the long reaching plot and characters: