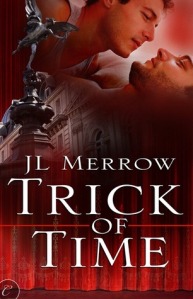 Devastated and scarred from the car accident that killed his husband and parents,  Ted Ennis decides to  work as a theatre assistant at the Criterion Theatre for his friend Rob,the manager of the theatre, rather than return to the bankers job he held prior to the accident and his disability. The crash has left Ted with some permanent physical issues as well as emotional ones, his hand shakes and his voice and speech changes under duress.  When stressed, one the of the things that helps to calm Ted is smoking.  One night during a production at the Criterion Theatre, Ted slips out the backdoor to grab a smoke and steps back in time into Victorian London.

With its dim lamps for street lights and sooty air, the sights and sounds of a 1800’s London surrounds him and Ted starts to wonder if the accident had not caused more damage to his brain than had been acknowledged.  Then amidst the horse carriages and people rushing by Piccadiily Square, Ted sees a beautiful young man leaning nonchalantly against a lamppost whose very face beckons Ted away from the theatre doorway.  The lad’s name is Jem and he’s a local whore who has mistaken Ted for competition.  At first, their relationship is a monetary one, but it quickly turns into something neither man is quick to label, drawing Ted back in time again and again searching out Jem just to be with him. But Ted doesn’t understand how or why he can travel back in time, and each time he returns, Jem is getting thinner.  Something tells Ted that time may be running out for them both unless he can figure out the trick of time.

J.L. Merrow has pulled from one of the most romantic, haunting of themes for the central basis of this story – that of opening a doorway or portal and stepping back in time.  Whether it is a door to a wardrobe,the sash of a window,or an unlikely looking machine,  the idea of actually being able to visit the past has enthralled and enchanted many a author and reader.  A Trick of Time, J.L. Merrow’s marvelous take on this theme, gives us a romantic, haunting and satisfying addition to this genre.

I am always so appreciative of Merrow’s ability to bring history to life through the author’s books and tales.  Within Merrow’s stories, the reader is thrust back in time where the air with thick with coal dust, the streets dingy, and life perilous for those poor or gay or just unlucky.  Here is a sample.  Ted and Jem have just sat down at a lowly pub near the theatre .” I looked down at the table, its surface scarred and pitted with use, crumbs of long-digested meals wedged in its crevices.”  I felt as though I could see that table, smell that table with its remnants of old food and greasy stench wafting up from its scarred wooden surface.  Merrow brings that pub to life in vivid detail, and does the same for every other part of this story.  I felt as though I had walked the streets accumulating grime as I strolled.

But it is her characters that bring the magic to the story.  Ted is a haunting and haunted figure with his scarred head, shaking hands, and survivor’s guilt.  How he grabs our empathy from the start and keeps it close throughout the story. We feel his disbelief when he steps into the past, and his terror that it might be his sanity at error. And as Ted’s desperation to see Jem, to be with Jem grows, we feel it as well.  And always in the back of our minds and Ted’s, is the fear that the doorway will close and Jem will be lost.  Merrow skillfully balances the deepening relationship with the growing fear of loss of same and keeps us teetering on the edge, caught between happiness and horror, joy and pain for Ted and Jem.  And make no mistake Jem is as beautifully realized a character as Ted Ennis.  Cocky, beautiful and very much a survivor but for how long?

Yes, there are places where some will argue that you have to suspend your belief, but don’t you have to do that to accept time travel as a possibility? This is a story of magical possibilities, a visitation to those dreams held close to the heart, of a love that not even time can deny to one who hopes. And who can deny the enchanting miracle of that?  Not me.  I loved this story and I think you will find it magical too.

Lovely cover although credit is not given to the artist in the book.