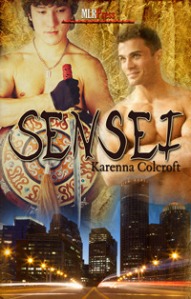 Isao Nakamura is a five hundred years old vampire.  He operates a dojo in a neutral territory surrounded by a vampire clan he is at odds with. Isao feeds only on the criminals he comes into contact with and saved many a innocent from the attacks of the vampires around him.  Now his actions threaten the fragile truce he has lived under and all those he has come to care about, including his new adult student James.  James is unaware that his Sensei that he has come to love is a vampire.  Isao returns James’ affections, a perilous idea at best.  Can the Sensei protect James and his dojo or will he lose everything in a final battle?

This is a short story of 73 pages and unfortunately Sensei reads as though we are given just the first several chapters of a much longer book.  The characters are interesting and in Isao Nakamura’s case, we are given to understand that he was once a ninja and that all the ninjas were turned to increase their warrior skills.  But that is our only glimpse of an intriguing backstory and except for one more throwaway sentence, it is forgotten.  Colcroft gives us a vampire clan and again just a marginal understanding of the universe in which they exist.  The small details the author does give us definitely piques the interest for more of her universe making and vampire history but since an overall picture is lacking, it brings the story up short literally.

James is a human without layers or history and that also brings down the interest in the Isao/James union.  Another vampire and former lover of Isao keeps asking the Sensei why James?  What’s so special about him?  But the author never gives him or us a good answer to that question. Again the short length of the story has also hurt her characterizations.

This is a quick read and ends in a HFN with no expectations of a HEA, at least as far as I can tell,  Perhaps the author has a sequel planned, but to bring me back to the table, she will have to bring more history, a more throughly realized universe and characters to the story before I visit here again.

Cover Art by Deana Jamroz is ok.  The design is just ok, but could have been so much better.