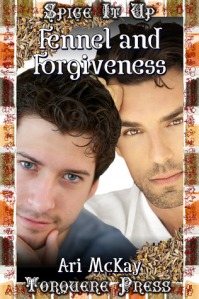 Maitre’d Darius Cooper of the renown Montgomery House has his work cut out for him this week.  Rhys Montgomery, owner of Montgomery House,  has decided to allow the Gourmet Network to use the restaurant for an episode of a reality show, while still keeping it open for business.  That means  Darius has to keep things running smooth and ensure that their famous and famously volatile chef, Executive Chef Stephen Pierce, is kept happy, no small feat.  But things start to go wrong from the beginning.  The bride picked out by the Gourmet Network turns into bridezilla, and the man in charge of the reality show shoot?  None other than Max Boyd, the only man Dare ever loved and the man who broke his heart seven years past.

Max Boyd has had seven years to grow up.  He left Darius Cooper to pursue his career, not ready to settle down to one man and a long term relationship.  But those years apart have seen Max mature and realize that he had left the only man for him behind in his pursuit of life as a producer.  Now Max wants Dare back but as Dare has made clear, Dare doesn’t trust him and wants nothing to do with Max.

With Chef Stephen Pierce threatening the bride, the owner threatening to toss them out , and Dare asking him to leave, how will Max pull off the production shoot  of Southern Wedding Belles and get his (and Dare’s) second chance at love?  Sometimes all it takes is a little fennel and forgiveness.

I love a plot where former lovers reunite for a second chance at love, that always gets to me.  So no surprise that the book description was really the thing that drew me to this story in the first place. I found this to be a sweet story but somehow just short of satisfying and it is hard to put my finger on exactly what component is the problem.

McKay has given us a wonderful location and setting for the story.  Montgomery House is a famous, historic restaurant in Charleston, SC.  and in it McKay has placed a renown chef with a huge ego and volatile attitude to match his reputation, an owner immensely proud of his restaurant and his restoration work and a Maitre’d equipped to handle both men and all other challenges except the one closest to his own  heart.  So far, great.  I loved them, the restaurant, and even the silly reality show brought into the mixture.  Southern Wedding Belles.  Someone has been watching a lot of TLC to get that one so right.

I think my problem is with the character of Max Boyd, the tv producer and the man who devastated Darius Cooper when he left him all those years ago.  I think the back story created for Max is a pretty realistic one.  Max was someone too young to handle a long term relationship with an older man who wanted to settle down.  Instead Max wanted to concentrate on his career, again understandable.  But the older Max still seems a little immature in my opinion.  Here is Max, after he has seen Darius again for the first time in seven years:

Looking back, he had to place the blame for their break-up squarely on his own shoulders. He’d panicked when Darius had asked him to move in, because at the time, he’d been more interested in climbing his career ladder than in settling down with one man yet. Ten years his senior, Darius was as solid as he was intense, and he’d wanted a commitment with a capital “C”, no holds barred and no going back. Unfortunately, Max was too immature and self-absorbed at the time to deal with the tougher aspects of sustaining a relationship and to compromise as much as he needed to. Max hadn’t been able to love Dare the way he deserved back then, but age and experience had helped Max understand that relationships required more than romance and sex; respect and a mutual commitment to making it last were vital.

The damnable thing was that he hadn’t been able to find anyone he wanted to commit to since then. He kept comparing his prospective partners to Dare, and they all fell far short of the mark.

So Max hasn’t found anyone as good as Dare so far?  And all this time, Max never looked up his former partner? Uh, no.  While McKay made me believe in Darius’ pain and the devastation Max inflicted upon his self image and ability to trust, I never really believed that Max loved Darius all that time they were apart.  I think it is that lack of belief in Max and Darius’s love that leaves this story foundering a bit.  It is sweet but not particularly memorable (or believable).

Also, while there is some discussion about them not getting back together immediately because of the pain inflicted, of course it happens almost immediately within the duration of the production shoot (after saying it would take time). Sigh.  I could see that a longer version might have made for a more realistic, better imagined reconciliation than the one that occurred within this story.  But as it is, it is too saccharine and far too unrealistic to be believed.

However, there is a lot to like here as well.  Mostly I loved Chef Stephen Pierce and Stephen’s PA Robert Logan.  Arrogant, snarky, and so much fun, they were the most interesting and absorbing characters in the story.  It was their story I wanted to read about, not Dare’s (disliked that nickname) and Max’s.  Ari McKay (a pen name for two people coauthoring as Ari McKay) has written the owner Rhys Montgomery’s story in Bay Leaves and Bachelors.  So I can only hope that Stephen’s story will be written as well.  That one I can’t wait for.

This is a sweet story, enjoyable and short at 102 pages.  It is just not very deep and multi dimensional but that fine, not every romance has to be.  I think most people will enjoy Max and Darius’ relationship.  I know they will love Montgomery House and the rest of the characters involved there.  I certainly did and look forward to more in this series.

Cover illustration by BS Clay.  Models are cute but Darius is 40, where is the older man in this picture?