Once upon a time . . . that’s how the old stories always begin.

And so this one begins, in a land both foreign and familiar, it’s a tale of princes, and merfolk and love…of a sort.

Once upon a time there was a king of a fallen kingdom. He was just and he was beloved. Or so the numbers said. One day, he gathered together the greatest, wisest minds in all the land—not sorcerers, but scientists—and he bade them fashion him a son. A prince. A perfect prince to embody his father’s legacy. 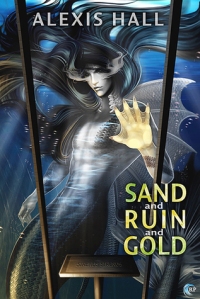 But as fate would have it, nothing ever turns out as planned and the golden perfect prince had other ideas for his future. After gazing upon the dances of the mer in a performance, our prince runs off to join the circus, the Cirque de la Mer.  Once there the prince trained the merfolk,  he performed with them, and  thought he was happy…for a year.

Time brought strange thoughts and emotions to the prince the closer he got to the merfolk. Then Nerites arrives, a mesmerizing merman who refused to be trained or tamed.  Nerites was something far more than the prince ever expected.  Nerites was savage and unknown.

Sand and Ruin and Gold hearkens back to the olden stories.  Not the comforting ” Disneyfied” fairytales but those of Grimm and Hans Christian Anderson.  Here the darkness and unknown reign supreme, not happy endings or light.  Less a tale of romance, this beautifully written short story builds an atmosphere of  creeping foreboding, a sense that not everything is as it seems.  The poetic nature of the narrative combined with an imagery that will enchant, then leave you haunted by the possibilities, make Sand and Ruin and Gold by Alexis Hall a short story that refuses to be limited by category or trope.

The feeling of something just off kilter is already present at the beginning.  Hall’s prince isn’t born, he’s a genetically perfected young man, created to be the ideal heir to a “good” king who resides over a fallen land.  The clues and telling phrases are slipped in sparingly at first, then in ever increasing numbers. As new descriptions of the circus and the shows appear, a far different picture emerges from our original assumptions of the merfolk and the circumstances at the Circus.  And along with it comes the feeling one gets when the hairs rise off your arm when frightened or the queasiness that originates in your stomach when it dawns on you that something you thought was happily normal or ordinary turns out to be fearfully, horrifically wrong.

Alexis Hall understands how to build a powerfully evocative story, one that runs more along the lines of those classics passed from bard to bard, told around fires in great halls and forests alike.  Whether those bards be from the past or perhaps even our future, that is but one more chilling aspect of this story, a tale that exists in the mists and ocean eddies of the dark seas of this unknown world. But its Hall’s stylistically vivid and powerful narrative with its lush descriptions that makes this story so stunning, so poignant.  This is how it starts out:

“I must have been very young when I saw the mermaids at the Cirque de la Mer because it was the nurse who took me and her place in my life was soon surrendered to tutors. I don’t think my father ever found out.  He would not have approved.

The day is little more than a sensory haze, of pastel children, the laughter of strangers, and the burn of salt and chemicals at the back of my throat.

The mermaids, though.  They are as vivid as stained glass, even now.”

Told from the prince’s pov, we feel his assumptions of his life and the circus fall slowly away as comprehension and understanding arrive building block by building block as events unfold around him.  It is a tale of deep love faced amidst horrifying truths.  One reading will not be enough to capture all the incredible and terrifying moments as sudden realization, and insight sets in.

And then there is that ending, the one that will refuse to let you go.  Its in the words and feelings that emerge, and the tears that will run down your face as you try to decide the implications of words strung like pearls, luminescent and beyond value.  An ending that will send you back to the beginning of the story and start this tale once more.

I highly recommend this story to all readers.  This is a story that should be on everyones shelf, whether it be made of wood or eReader.  This is one of Scattered Thoughts and Rogue Words Best of 2014 as is its cover.

Cover Artist:  Simone.  The artwork for Sand and Ruin and Gold is every bit as lush and haunting as the story itself. One of the best covers of the year.

Sand and Ruin and Gold