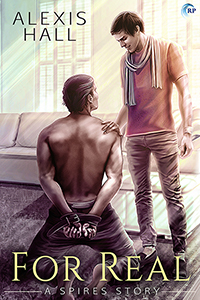 For Real by Alexis Hall
Published by Riptide Publishing

Alexis Hall quickly became one of Scattered Thoughts and Rogue Words “Must Have, Must Read” Authors with his stories Glitterland, Waiting for the Flood (both Spires universe books),  and Sand, Ruin and Gold.  Now comes another standalone novella in the  Spires universe, For Real released June 1st.

Check out this wonderful author below and don’t forget to enter the giveaway by leaving a comment at the end.  Make sure to include your email address where you can be reached if chosen.

Alexis Hall was born in the early 1980s and still thinks the 21st century is the future. To this day, he feels cheated that he lived through a fin de siècle but inexplicably failed to drink a single glass of absinthe, dance with a single courtesan, or stay in a single garret.

He did the Oxbridge thing sometime in the 2000s and failed to learn anything of substance. He has had many jobs, including ice cream maker, fortune teller, lab technician, and professional gambler. He was fired from most of them.

He can neither cook nor sing, but he can handle a 17th century smallsword, punts from the proper end, and knows how to hotwire a car.

He lives in southeast England, with no cats and no children, and fully intends to keep it that way.

Every comment on this blog tour enters you in a drawing for a $15 Riptide store credit. Entries close at midnight, Eastern time, on May 23. Contest is NOT restricted to U.S. entries. Don’t forget to add your email so we can contact you if you win! Must be 18 years of age or older to enter. Prizes provided by Riptide Publishing.