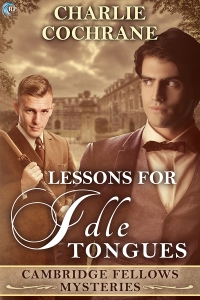 Amateur detectives Jonty Stewart and Orlando Coppersmith seem to have nothing more taxing on their plate than locating a missing wooden cat and solving the dilemma of seating thirteen for dinner. But one of the guests brings a conundrum: a young woman has been found dead, and her boyfriend is convinced she was murdered. The trouble is, nobody else agrees.

Investigation reveals that several young people in the local area have died in strange circumstances, and rumours abound of poisonings at the hands of Lord Toothill, a local mysterious recluse. Toothill’s angry, gun-toting gamekeeper isn’t doing anything to quell suspicions, either.

But even with a gun to his head, Jonty can tell there’s more going on in this surprisingly treacherous village than meets the eye. And even Orlando’s vaunted logic is stymied by the baffling inconsistencies they uncover. Together, the Cambridge Fellows must pick their way through gossip and misdirection to discover the truth.

When I first fell in love  with Orlando Coppersmith and Jonty Stewart in Charley Cochrane’s first Cambridge Fellows Mysteries, Lessons in Love (Cambridge Fellows, #1), I had no idea I was letting myself into a long time love affair with these characters and this amazing author.  Yes, the  attention to time period minutiae was perfection, as was the way the author folded it into the story.  Yes, even the conversations were spiced up and made relevant to the era and social strata by the appropriate language and verbiage the author employed to great impact in her narrative. So much so I often had to resort to some research of my own to figure out what certain terms and slang meant to a modern-age American.  Some of the elements of the story were steeped in English history and others simply in the English culture but whatever my temporary source of bafflement, my interest in this unique and fascinating couple never wavered…not once.

Orlando and Jonty were so very different in those early days.  They had the struggle to adjust to each other’s presence, and then to each other’s attraction and then the unalterable fact they were falling into love…all during a time when this mean jail and often death.  And it was carried out in the somewhat cloistered halls of St. Bride’s College, a place of high learning, occasional high spirits and hijinks until murder finds its way there.  And then the sleuths were off on a perilous investigation that included self discovery and more than a little affection.

I have laughed and bawled my eyes out along the way as Jonty and Orlando moved through the years and the vagaries of their changing culture and historical events.  And with each book, mystery, and time frame, I fell completely under their spell and forever in love.  And that’s due to the superb talent and depth of characterization that Charley Cochrane employs.

Like punting along a waterway (as Jonty and Orlando are fond of doing), all can seem serene in one of  the Cambridge Fellow Mysteries but it’s what lurks underneath that gives these characters and their stories such dimension and sometimes shocking humanity…and you would never suspect that its there, at least not at first.  Because the civility and tone of the story and language lulls you into a state similar to a promenade or arm in arm stroll in the gardens. It’s a lovely feeling, carefree and delightful. Until murder strikes or some horrific fact pops up to let you know that the deep waters were there all the time and you were merely treading water.

Here in the 11th story, that is never more apparent.  A simple mystery leads to the deeper, more complex one, and then the smoke and shadows of multiple lies or omissions lead Orlando and Jonty into a maze of betrayals, murder, and complicity.  And even as Cochrane is leading us and our Cambridge Fellows on a deep and convoluted trail, she manages to allude to some of this series most horrific elements and facts with a deft turn of  phrase or haunted look.  I will tell you that Orlando can suffer from deep depression (a fact that figures greatly into the earlier stories).  And that something extremely damaging happened to Jonty in his early days at boarding school.  And nothing more.  For those momentous discoveries, I will send you back to the beginning story and ask that you wind your own way through the various stages of their relationship and personal disclosures.  It’s a journey not to be missed and one you will take again and again.  And that knowledge will enhance your enjoyment here in Lessons for Idle Tongues (Cambridge Fellows Mysteries #11).

I didn’t figure out all the intelligent clues and facts strewn about the story.  How I adore that!  There are wonderful literary allusions, more terminology to investigate (Bertillon measurement, anyone), and that magnificent Stewart family as a whole to enjoy and revel in.  I laughed, frowned in puzzlement, and throughly enjoyed myself at every page.  And then started the story all over again.  Lessons in Idle Tongues is amazing, Charley Cochrane’s writing is deftly accomplished, the pace sprightly for a complicated mystery, and the whole story comes together just as it should and will leave you still wanting more.  Thank goodness, we are going to get it.

Can you read this as a stand alone story?  Probably (I say with great reluctance).  There is enough context here that you don’t need to have read the other stories to get great pleasure from Lessons for Idle Tongues.  But that statement comes with a caveat…the same cannot be said for the earlier stories.  This especially holds true for the books All Lessons Learned and Lessons for Survivors (#8 and #9).  Remember as the men are moving into their relationship, the years are changing as is history.  Those have to be the two most memorable books Cochrane has yet written for Orlando and Jonty.  But their power and impact is built upon the foundation stones of the previous stories.  Why not grab up all of them together and binge read? Riptide and Samhain Publishing are working together so that’s possible.  Two new books and a complete set of stories…I love it!  Charlie Cochrane’s Cambridge Fellows Mysteries remains one of my most highly recommended series.  Lessons for Idle Tongues  is a marvelous new addition to that amazing group of novels.

I have listed them all for you at the bottom.  Use it as a checklist or TBR list, whatever works best for you.  Don’t let this story or any of those books pass you by!

Cover art by Lou Harper does the couple and series justice.  I love it!

Cambridge Fellows Mysteries in the order they were written and should be read (imo):

Get 30% off books 1-8 of the Cambridge Fellows Mysteries, exclusively in a bundle from Samhain!