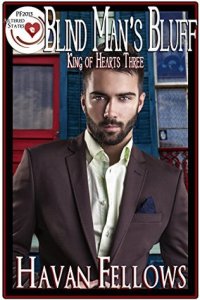 His modus operandi is to feed and leave…

Laurant never repeats a meal. Not that his hors d’oeuvres complain. The incubus enjoys meeting every one of their needs multiple times over, leaving them in a blissfully sated state of mind for days—sometimes weeks—afterward. So, even though Laurant’s power is diminishing, why hasn’t he sought nourishment these past months since that explosive true feeding in March? For once in his centuries-old life, he realizes he doesn’t want just a snack…he wants a mysterious feast.

He has powers and no idea how to use them…

Gun has done his best to stay away from the sexy as hell incubus despite all his taunts and teases. Avoiding the demon was simple at first…but Gun’s powers are awakening and they like the sex demon. A lot. Now it isn’t so black and white, especially when Laurant focuses all his stimulating attention on helping Gun find his origins. But the once vivacious incubus doesn’t appear his lecherous perky self anymore. Gun jealously thought he found sustenance with others, but perhaps not. Maybe Laurant needs him again…and maybe Gun is okay with that…

They just might be on the verge of overcoming all the obstacles in their way…that is until those special three little words are whispered with the strength and magick to tear them apart completely.

In the Pulp Friction universe, the third round of stories always brings the heartbreak and the action.  The characters always seem to end  up at the edge of a precipice and the only way out is down.  Oh, the angst and suspense!  In Blind Man’s Bluff (King of Hearts #3), Havan Fellows stays true to the pulp fiction formula and heightens both the emotional tension between Laurant and Gun as well as the relationship “high stakes” that comes with trying to combine an incubus with a taste for men and a sexy man who is more than anyone can figure out, including himself.  Gun is that true unknown quantity.  He has no memory of how  or what he is.  But clearly from past events, he’s not human. But the answer to what he is remains illusive.  Until someone from his past arrives in town to supply the answers. Or do they?

Gun is a wonderful character, made all the more remarkable because we have come close to knowing who he is ( his pov as supplied by Havan Fellows is a large part of the narrative).  Still what type of supernatural being Gun is remains an unknown.  But the clues are starting to pile up and the assumptions being made aren’t pretty.  That’s a huge amount of power he is capable of wielding, turning him into a weapon that can tilt the outcome of battles.  But whose side is he on? And what battles are looming up ahead? Some  of the answers start to fall into place here.

But the drama that pulls at me is on a smaller, more personal level.  That’s the tentative relationship forming between Laurant, the incubus who has never had a “special someone”  before, and Gun, the man who doesn’t  know who he is. Plus there is the added question of whether he can trust the politics that pull at Laurant constantly over his feeding and choice of partner.

Oh, Laurant.  how can such a sex on two legs demon come across as so vulnerable?  The author manages to make Laurant accessible and emotionally open, even as his actions and words give off an opposite impression.  I love this incubus.  He’s both troubled and troublesome.  He’s the gregarious man at the party and the lonely man in his heart.  How do you not find him charming and worthy of his own HEA?

Here it almost breaks and for so many reasons.  The other couples are acting uncharacteristically mean towards each other, all the close friends support for this unusual circle of friends seems to be breaking down and there is a darkness feeding the instability and pain erupting all around them.  Typically, this story raises more questions than it answers…perfect for a Round Three story.  I expect that and now eagerly await story number four.  As hearts break so I hope they will be mended.  Soon.

I love this series and characters.  They are wonderful, sexy, and unique.   If you are new to the Pulp Friction inter-connected series and groups of characters, then please realize these are not standalone stories.  They must be read in the order they were written.   I have listed them below.  Check them off as you go.  They are all on my Must Be Read  lists for this year!  Grab them up and get started today.

Cover art by Laura Harner.  These covers are getting better and better as well as darker and darker.  It goes along with the emotional tone of the stories and events that are occurring.

Spend a year with the creatures that go bump in the night…fighting for their rights to exist and protecting the innocents of The Big Easy. A diverse group of friends trying to find their place in a world they never had to “fit” into before.

Although each series can stand alone, we believe reading the books in the order they are released will increase your enjoyment.
Round One:
Drawing Dead (Jack of Spades: 1) by Lee Brazil
Blind Stud (King of Hearts: 1) by Havan Fellows
The Devil’s Bedpost (Four of Clubs: 1) by Parker Williams
Diamonds and Dust (Ace of Diamonds: 1) by Laura Harner

Round Two:
Dead Blind (Jack of Spades: 2) by Lee Brazil
Stud Player (King of Hearts: 2) by Havan Fellow
Up the Ante (Four of Clubs: 2 ) by Parker Williams
Diamond Draw (Ace of Diamonds: 2) by Laura Harner