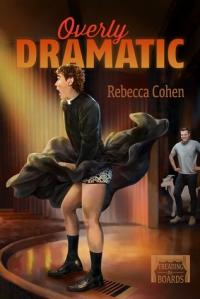 Andy Marshall moves to London looking for a fresh start after breaking up with his long-term boyfriend. To stave off boredom from his day job as an accountant and to meet new people, Andy joins a local amateur dramatics society called the Sarky Players based in Greenwich, South London. Despite his best efforts to avoid it, Andy is cast as one of the leads in a truly dreadful play called Whoops, Vicar, There Goes My Trousers, written by a local playwright.

The play might be bad, but the Sarky Players are a friendly bunch. Andy quickly makes new friends and finds himself attracted to Phil Cormack, a local artist helping with the props. But life doesn’t run to a script, so Andy and Phil will have to work hard to improvise their own happy ending.

I’m used to Rebecca Cohen having a few characters who trod the “boards” in her stories but those actors did so in William Shakespeare’s days.  Now Rebecca Cohen has given us a gentle romp herself with Overly Dramatic, a light-hearted romance set in contemporary Greenwich,  London, England, where a local amateur acting group is putting on a resoundingly bad play.

The name of that  play? “Whoops, Vicar, There Goes My Trousers!”  Full of double,triple, and quadruple entendres and a vicar mounting paper mache’ goat on wheels,  its a disaster along the lines of “Springtime for Hitler”.   The dramatic society producing the play is the Sarky Players, a local dramatic group Andy Marshall has just joined looking for companionship and perhaps something more.  Andy was lured in thinking the play was Cold Comfort Farm but once he started to read for it, Andy was caught up in the people, the action and the feelings of being part of a group again.

I loved how the author brought the Sarky Players to life in their snarky, believable characters.  I thought these were people we had in our offices or sat next to us in the cubicles or ran into at class reunions.  Even Andy and Phil are far from the normal “gorgeous” characters that may stride across your typical m/m romance novel.  A little paunch is visible (and Andy’s ok with that), the brown hair is lovely and nice but maybe not so glossy.  In short, lovely, men (no I won’t call them average – dislike that) who might fall along the “normal” range than movie star.  Both Andy and Phil are coming off bad romances but not completely disastrous ones.  And that just might be a problem right there for some readers.  There is no hurt/comfort.  No drama.  Just two very human men slowly finding their way into a relationship with each other.  Amidst a very bad play.

Some readers will find this boring.  I found it very sweet and lovely.  What did I wish more of?  Something more from the ending.  That felt a little abrupt.  It needed to play out a little more than it did for my total satisfaction. Other than that…this play and these men were just my thing!

Rebecca Cohen’s secondary characters are well crafted as her main ones.  I loved Ussie, Andy’s elderly game-playiing neighbor, along with Ryan, Derek and Naomi.  Ryan needs his own HEA and as this is just the start of the Treading the Boards series, I’m hopeful that is to come.

If you are looking for drama (outside of bad plays and paper mache’ goats of course) and angst, this is not the story for you. But if sweetness, lovely men in search of love and romance is your thing, then Overly Dramatic is a story you will enjoy.  I know I did and I look forward to the others in this series.

Cover art by Paul Richmond was as cute and adorable as the story and cast.  How can you resist a man in that Marilyn Monroe pose?

One thought on “A MelanieM Review: Overly Dramatic (Treading the Boards) by Rebecca Cohen”