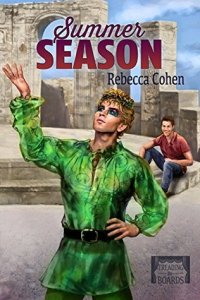 A trip down to Cornwall is just what Ryan Penniford needs to recover from the daily grind of London life. Ryan and his amateur dramatics society, the Sarky Players, are traveling to Porthcurno to perform at the stunning Minack Theatre.

Stuart Box has returned to Cornwall after earning his PhD, and is killing time as he looks for a job back in London. Spending time with Ryan from the Sarky Players is a great way to take his mind off things.

During their first meeting, sparks fly, but not in a good way, and they must work to get past their initial hostilities to discover they have great off-stage chemistry. Stuart soon learns Ryan is not the superficial man people assume he is, and Stuart likes what he sees. The feeling is entirely mutual.

Pity Ryan is only visiting for two weeks, but both men want to see where this holiday romance might take them.

Summer Season (Treading the Boards #2) by Rebecca Cohen continues the romantic ventures of a local amateur dramatics society called the Sarky Players.   In the first story, Overly Dramatic, it was Andy and Phil who got their HEA, leaving a certain Ryan Penniford to wonder why neither man thought he someone worth pursuing.  Here he gets his answer.  Its because he hadn’t found the man for him yet.  Ryan meets that person when he travels to Porthcurno to perform with the Sarky Players at the famed Minack Theatre.

I’ve included a photo in the review only because if you aren’t familiar with this theatre (I confess I wasn’t before this story), you will be afterwards.  Its as much a major character as any of the other players and rightfully so.  It provides the dramatic backdrop not only for a successful run during the story of Shakespeare’s A Midsummer

Night’s Dream by the Sarky Players with Ryan as a sexy Puck but the romantic setting of sea and village can make anyone fall in love.  Its magic.  We can imagine it because Rebecca Cohen brings that magic out on the page and into the scenes, from the salt on the sea air and the dolphins dancing on the water behind the actors to the walks down the lane.  You get it.  And want to hop on the next plane out to experience it all for yourself.

We get two points of view here, which is nice.  Stuart is at that uncertain place in his life. His degree done, he’s returned home to send out resumes and think about his next step.  So we see all his jumbled thoughts about his future, and the questions in his mind about what to do next. Home includes a wildly unconventional mother who I adored and a pair of neighbors who figured large in his upbringing.  One of which manages the Minack and brings Stuart back into helping out with the new production which is coming into the village.

The other pov is Ryan’s who is a player on the surface, and the total opposite once the layers are removed.  Only he’s hesitant to remove his layers for anyone to see for fear of being hurt.  One person in transition, the other there for only two weeks and afraid of being hurt.  But Cohen shows us that the right place, the right timing, the right people and yes, the magic can happen and feel real.

I am not a believer in “insta love” and part of this still feels a little too fast for my liking.  Yes, too summer holiday.  But they text, and call, and continue to connect once the holiday is over.  And that made it believable for me.  They worked for it.  They traveled to see each other.  I liked that about this story.  It wasn’t a “insta love” and boom they were HEA.  No things had to be worked out. Jobs, housing.  RL issues.  Yet the romance didn’t falter either.

I was actually sorry to say goodbye to Porthcurno and be back in London again.  But that’s where the Sarky Players call home and there’s another story yet to come.  I would love to see the Sarky Players take another road trip.  This one turned out fantastic. I learned about The Minack Theatre and read a lovely romance.  The Sarky Players are such a sweet, fun group. I definitely recommend you make their acquaintance.  Each and every one, from Overly Dramatic to Summer Season.  You don’t need to read the first one to read this one.  Each sort of operates as a standalone, putting them together, however, is a definite plus!  And there’s one more to come.

Cover art by Paul Richmond captures almost every major story element.  Its amazing.  From Ryan as Pan with Stewart watching to the famous Minack Theatre in Cornwall, its perfection.