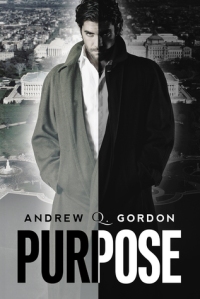 Forty years ago the Spirit of Vengeance—a Purpose—took William Morgan as its host, demanding he avenge the innocent by killing the guilty. Since then, Will has retreated behind Gar, a façade he uses to avoid dealing with what he’s become. Cold, impassive, and devoid of emotion, Gar goes about his life alone—until his tidy, orderly world is upended when he meets Ryan, a broken young man cast out by his family. Spurred to action for reasons he can’t understand, Gar saves Ryan from death and finds himself confronted by his humanity.

Spending time with Ryan helps Will claw out from under Gar’s shadow. He recognizes Ryan is the key to his reclaiming his humanity and facing his past. As Will struggles to control the Purpose, Ryan challenges him to rethink everything he knew about himself and the spirit that possesses him. In the process, he pushes Will to do something he hasn’t done in decades: care.

There are two things you should know before you start reading this book. First of all, the story is pretty violent at times. In the beginning, Gar is essentially a cold-blooded killer. He does have his reasons, but he still kills people. Second, there is no happy end, probably making “Purpose” more of a sci-fi/fantasy story than a traditional romance.

This book was incredibly intense and emotionally challenging. I found myself deeply engrossed after only a few sentences. I couldn’t put my kindle down at all. I started this on a long train ride, where I usually read a bit and then turn on my laptop. This time, I didn’t even unpack my laptop. And the train ride suddenly wasn’t all that long either.

The setting seemed very unique to me. Gar/Will is possessed by what he refers to as the Purpose. He doesn’t really know all that much about It. He only knows that It somehow draws the souls of innocents to him and he has to avenge them by killing their killers. Memories of former hosts have shown him that ignoring Its will results in insanity within a few days.

Like previous hosts, Will has adapted the persona of Gar, a cold, emotionless man, who lives solely for the Purpose. He doesn’t have friends, family or a lover, so when he finds himself suddenly attracted to Ryan, it comes as a huge shock. He hasn’t been attracted to anybody in forty years and suddenly he feels like he just has to speak to this stranger on the train.

With Ryan’s help, Will takes over again and pushes Gar to the back of his mind. It was intriguing to watch cold, distant Gar slowly turn back into Will. They really felt like two completely different people. Reading about Will’s pain broke my heart. Reading about his struggles and doubts made me want to hug him. It was frighteningly easy to feel really connected to him.

The author came up with some pretty interesting ideas. Like the scrambler-box that lets Will turn invisible or take on a completely different look at his will. That explains how he managed to go undetected for forty years. He did kill countless people, after all, and the police don’t make a distinction between innocent victims and those who truly deserve to die. The author eventually came up with a thoroughly logical explanation for everything and I absolutely love him for that. Andrew Q. Gordon really thought this through.

The relationship between Ryan and Will is absolutely crucial for the plot and yet somehow doesn’t really matter all that much in the grand scheme of things at the same time. I could really feel the connection between those two.

The author decided to solely write from Will’s POV, which worked really well. I loved that there were more personal journal entries in between the normal chapters. Even when Will was still Gar, the journal entries felt very thoughtful and emotional.

I decided to knock off half a star because while there eventually was an explanation for everything, it took a long time to get to that point, often leaving me wondering just how this all worked.

To sum it up, I absolutely loved this book. It was unique, imaginative, intense and deeply moving. Had everything been explained a little sooner, I would’ve happily given this the full five stars.

This is my first book by Andrew Q. Gordon, but it definitely won’t be my last. This man seriously knows how to write!

Cover: The cover by AngstyG is brilliant. It shows Gar in his black-and-white world and Will in his world that suddenly has shades of gray.