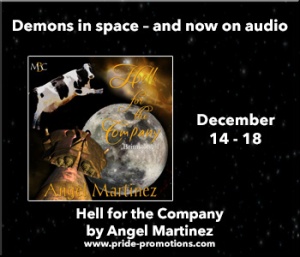 Demons and Angels have been among us for thousands of years, in many cultures and in many forms. What happens when you set the Mischief Corner authors loose on the vague prompt “Write a story about angels or demons?” The poor unsuspecting world is about to find out.

From Angel Martinez – Hell For The Company: Brimstone #1

Shax, the Demon Prince of Thieves, has reconciled himself to exile. He has a grand time careening around the galaxy as a high-end, intergalactic purloiner of pretties. Everything’s going just fine, thank you very much. All right, fine, the anti-gravity cows are a bit problematic and some of his buyers are bad for his health, but he manages until he comes across an injured angel in a psychedelic alien jungle.

He only rescues the wing boy for his golden feathers, but what Shax doesn’t know about angels could fill an intergalactic encyclopedia.

Hell For The Company (Brimstone #1) by Angel Martinez as narrated by Vance Bastian was my very first audiobook.  I normally take one look at the running length on an audiobook, think about all the things I have to do, and move along.  But Hell for the Company was different.  At a play time of 2 hours, 2 minutes, I thought that’s doable, given my schedule, even during the holidays.  Another absolute plus?  I had already read the story, loved the series, so I thought I was prepared for what I would find in a narrated version.

This was so much better. Boy, am I going to have to rethink my entire approach about audio books.  This version, listening to Vance Bastian’s narration made me see (hear) the story in an entirely new light. I enjoyed it even more, laughed at places I didn’t even remember reading the first time around.  And even when I knew the dramatic scenes were coming, the sniffles still flowed.

Vance’s voice went from melodic for the wonderful drag queen IA. Ivana, to gruff and surly for the demon Verin, the later posing my first and only stumbling block for audiobooks.  It wasn’t the way I imagined Verin sounded, I expected more hell fire I suppose.  Its the same issue you might have with characters going from book to the screen, we imagine them a certain way, not the way they appear on the movie screen. So I had to expand my versions into the verbalized ones here.  Once done,  there were no limits to my enjoyments of the narration and the enthusiasm that Vance Bastian employed in his reading of Angel Martinez’ story.

The time went by so quickly.  Floating cows please come back.  Ness, I adore you. Oh, Shax, you demon you, I can never get enough of you! Much more so this time around.  Angel and Vance, you have me convinced.  Yes, it looks like audiobooks are the thing for me.  There will be more in the future.  And it all started with the marvelous Hell For The Company (Brimstone #1) by Angel Martinez and the wonderful narration by Vance Bastian.

I love this series.  Shax, the Brimstone crew and all its misadventures and now I get to look forward to listening to them as well.  Are you a lover of the supernatural? A reader of science fiction?  And romance too?  How about a combination of all three?  Here is a story and series you can’t pass up and a lively narrator that makes the words shout, laugh, giggle and snort.  Such two joyful hours I never imagined.

Are you a audiobook virgin too?  Make this your first and see what an adventure lies before you!

Cover Artist: Freddie MacKay did a terrific job on the cover.  Love the floating cows.