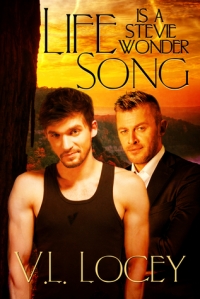 Authors know that their muse is a fickle creature. Best-selling spy novelist Stephen Ramsey has been in a hate-hate relationship with his inspiration for months. When Stephen’s publisher lays a legal ultimatum upon him, with a rapidly approaching deadline, he knows he must do something to kick-start his creativity or face the unemployment line. His daughter comes up with a possible answer: a summer camp for the creative soul. With nothing to lose, Stephen packs up his laptop, phonograph and beloved record albums and heads from Greenwich Village to the Catskill Mountains.

There, among a horde of college students attending for extra credits, is Declan Pomeroy, a photographer of fey creatures who is twenty-two years younger than Stephen. The woods are a magical place, and he quickly finds himself falling under the spell of the free-spirited photographer. Confusion wars with desire inside Stephen as he succumbs to the feelings welling up inside. But, sadly, summer camp always has to end. Can a man who has just found himself really leave the person that makes his heart sing?

Nothing makes me happier then to discover a new (to me) author and a wonderful story.  V.L. Locey’s  Life is a Stevie Wonder Song did both.  Locey’s did so many things right in this story from the wonderful locations to the absolutely marvelous characterizations.  But the thing that stood out the most, almost immediately?  That her novelist Stephen Ramsey thought and spoke like a literate man.  I almost swooned over his words and thoughts, thinking, “Yes, I do believe this is a man of letters.”

I fell in love with Stephen Ramsey over and over again just through his thoughts and ability (V.L. Locey’s) to use the language.  He describes Declan as a “coquette” and its perfect.  Another time as Declan is pulling him along through the woods, Stephen thinks “For being so slender, he was a strong little tugboat.” And that says it all so beautifully.

Then there is Declan Pomeroy, photographer of fey creatures. Declan has the strength of a willow.  He bends, moves with all the etherial nature one would expect, yet the strength is there as well, deep rooted and firm.  I love Declan, he is surprising and magical. Both men are layered and believable, and I committed my feelings to both upon meeting them.

More interesting was the author’s handling not only of their age difference but of the author’s gradual awakening and acceptance to the fact that he is either bisexual or pansexual (I’m actually all for abandoning the GFY appellation).  I think it was done with a wonderful realism and recognition how they would deal with it in their relationship.  Very well done.  Better yet was Stephen’s dawning realization that he was attracted to Declan, the idea that he might be gay/bisexual, and what that meant for himself, his past marriages/relationships/daughter/ and his future.  Ah, denial.  That’s a phase many of us would recognize.  I love those scenes.

And here comes my only outright deplorable element in the story.  I can’t decide if the author did it on purpose and if so it really is outside of the character she had created but she has Stephen wondering if he is a “f####t”, a word I find so hateful that I refuse to use it here.   Up to this and after, this man is a liberal New Yorker, a man of letters, who uses the language as if he was born with a dictionary  in his mouth.  Then this?  No, I think this was used to shock by the author and was a huge misstep.  It was one of the reasons this story was just shy of a 5 star rating and that the ending seemed a little rushed.  I wanted so much more of their story.

Looking back, I find it hard to believe that this gem of a story is only 87 pages.  So much love and exploration of the human heart is to be found here.   Looking for a author to love and a story to take to heart?  Grab up Life is a Stevie Wonder Song by V.L. Locey and prepare to fall in love.  I highly  recommend it.

Cover artist Kris Norris has 1/3 of a good cover.  Stephen Ramsey is spot on, but the fey, slim Declan?  No where in sight or the wood that is so much a part of this story.

One thought on “A MelanieM Review: Life is a Stevie Wonder Song by V.L. Locey”