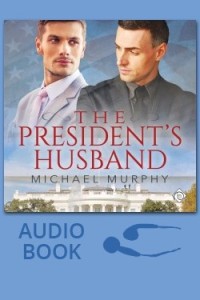 When an assassin’s bullet strikes his predecessor, Grayson Alexander becomes the first openly gay President of the United States and his husband, David Hammond, becomes the first openly gay First Husband. With their world turned upside down, David relies on his career as a medical school professor and ER doctor to keep him grounded. But his decision to keep working ruffles feathers from day one.

Gray throws himself into learning everything he needs to know to be President, especially a liberal president surrounded by a conservative cabinet and staff. Even though he puts in outrageous hours working and traveling seven days a week month after month, he’s happy. But David has trouble coping with Gray’s new job requirements. He can’t help but feel abandoned by his husband of ten years.

When Gray asks for his help with a public-health crisis, David obliges, but he is furious about what happens once the emergency passes. When they learn that the President’s staff has manipulated them both, they wonder if their relationship can survive the White House.

The President’s Husband is a remarkable read. If you’re looking for a political thriller, a steamy romance, or a drama, this is not it. This story is solely about the relationship between the newly appointed President of the United States and his husband of ten years.

We get to meet David and Gray during the Presidential Inauguration. The author gave us a hint of their relationship and how comfortable they are with each other. After ten years of marriage, they knew each other well and respected their individual careers and their dedication to them.

David and Gray have a great chemistry that it’s easy to feel during the entire story, even when they weren’t together. They have an active sex life, which the reader gets to hear more about than actually be witness to, but it works with the focus on their marriage. The on-page sex isn’t there to arouse the reader but to complement the couple’s relationship.

The political discussions are minimal since we only get David’s POV. There’s enough to set the stage for the book, but mostly, everything seems separate from the main plot. Yes, politics kept them apart, but the policies and procedures aren’t the main reason for it.

I think they are more medical references and information in the story than politics. The medical crisis David helps Gray with is the main point of content between them. There are a lot of details about what happens during this time, and some parts may be a little monotonous.

There’s a lot of drama involve in this novel, and David takes the center stage. We pass a significant amount of time in his head, making it difficult to get to know Gray. In reality, David is the main character and Gray is just his husband. We don’t get to see the antagonist doing his bidding, just mentions of him. It isn’t until the climax that we get to see the extent of his involvement.

David and Gray interact with a high amount of characters, but we only get to learn the names of a handful. David’s experiences are more important than how he gets them. Gray’s not a strong character, but he’s likable enough. I like David and how he took life by the horns, but he was a bit whiny in certain areas.

In order to enjoy this story, you need to be in the right frame of mind. You have to forget about everything you know about the President and how his family is handled. There aren’t meddling family members or best friends. David takes all his decisions using logic and tries to retain the status quo instead of rocking the boat. And this cost them both deeply.

Overall, this is a story about marriage and how communication is essential in a relationship. They could have solved a lot of problems with a simple conversation, but the rest of the drama is just an added bonus. I’m surprised by the lower rating in this story, but I think is more of a case of expecting a different story.

Personally, I’d had them get a divorce and become friends instead, but that’s just me. I enjoyed their courting and how they fought to be back together. I think Gray’s POV was needed. Plus, I think they were too young for their level of accomplishments.

This is my first story narrated by Randy Fuller. He did an excellent job, not only with the characters’ voices but with the feelings behind their exchanges. Also, I love how mature his voice is. It made it easier to visualize the main characters as older men with established careers instead of young men trying to figure out life. He also incorporated the omniscient narrator and gave it its own tone.

The cover by L.C. Chase goes with the story, but it’s hard to see the two men like David and Gray. There weren’t enough details in the story to have a clear picture of what they look like.