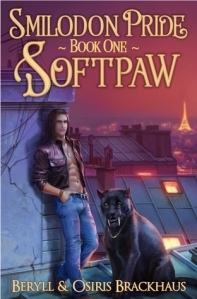 Connor’s life could have been the dream of any cultured werecat. He is spending his days in Paris’ gay quarter with comfortably little real work, playing the piano, surrounded by art, fine food and good friends. It could have been, if not for a feral vampire preying on the prostitutes of ‘his’ quarter, killing the boys of the Marais one by one.

When Connor invites a newly arrived hooker to stay on his houseboat, the last thing he expects is Michel to be a member of the Brigade Criminelle – a troubled, hunky rookie cop sent undercover to explore Connor’s connection to the murders, picked mostly because he had been a boy of the Marais himself, not so long ago.

Hiding their true nature becomes a problem for both when they realize there maybe is more to their initial attraction. But in order to bring down the serial killer and maybe have a chance at making their relationship work out, one of them will have to
take the first, critical leap…

Connor has been living a quiet life in Paris while trying to figure out what he really wants to do with his life.  Connor is surprised when Michel takes him up on his open invitation for a place to stay.  Both hide important information about themselves from the other while opening their hearts to the other.

This story is told from both of the main characters’ point of view, which helps to understand them a bit better.  Connor does everything to be helpful to others and do what he feels is right it personally hurts him when the vampire begins its’ killing spree.  Michel wants to do his job, but has trouble believing Connor’s connection to the murders is anything other than coincidental.  When Connor uncovers Michel’s duplicity I could feel how betrayed he feels and how much more determined he is to take care of the vampire.  Connor and Michel get a wonderful HFN ending that they both deserved.  There was a look at the next book in the series and I look forward to reading it in the future.

Cover art is nice and portrays the story setting nicely.