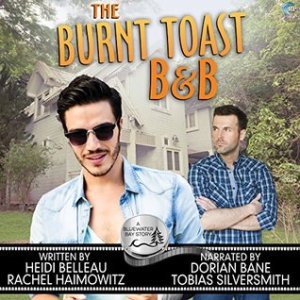 After breaking his arm on set, Wolf’s Landing stuntman Ginsberg Sloan finds himself temporarily out of work. Luckily, Bluewater Bay’s worst B&B has cheap long-term rates, and Ginsberg’s not too proud to take advantage of them.

Derrick Richards, a grizzled laid-off logger, inherited the B&B after his parents’ untimely deaths. Making beds and cooking sunny-side-up eggs is hardly Derrick’s idea of a man’s way to make a living, but just as he’s decided to shut the place down, Ginsberg shows up on his doorstep, pitiful and soaking wet, and Derrick can hardly send him packing.

Not outright, at least.

The plan? Carry on the B&B’s tradition of terrible customer service and even worse food until the pampered city boy leaves voluntarily. What Derrick doesn’t count on, though, is that the lousier he gets at hosting, the more he convinces bored, busybody Ginsberg to try to get the B&B back on track. And he definitely doesn’t count on the growing attraction between them, or how much more he learns from Ginsberg than how to put out kitchen fires.

Derrick is miserable, he never wanted to take over his parents’ B&B, but falls into it after he was laid off and his parents’ passed away.  He has never been very comfortable in his skin, even if he won’t admit it to others.  Ginsberg is perfectly comfortable with himself and has worked hard to be the man he is today and isn’t going to change that for anyone.

This story was told from both characters’ points of view, which made understanding their thoughts a bit easier.  It’s easy to see Derrick struggling with keeping up and being what he thinks a man should be even if sometimes you just want to give him a slap across the back of the head for being an idiot.  Ginsberg looks at the world as the glass is half full and is slowly able to show Derrick that everything isn’t as bad as he thinks.  Derrick takes awhile to get with the program, but once he does he is all in.

Dorian Bane and Tobias Silversmith did a nice job narrating this story.  I could connect with the characters through the voices and emotions they portrayed.  This is the first time I have listened to a story with separate narrators for the two main characters, I can’t say that it either helped or hurt the story, it was just different and I still enjoyed listening to them.

Cover art by LC Chase is nice and follows the pattern for the series.