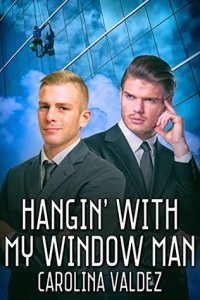 Ryan Halloran is attracted to Boon Andrews the moment he sees him on the window cleaners’ gondola outside his high rise office. But horror sweeps through Ryan when a gondola cable snaps, and his call to 911 saves the lives of Boon and his co-worker.

Although the near-fatal accident brings these two men together, never could two men be further apart in lifestyle and social status. Boon, a tattooed high school drop-out, wears earrings and dresses in frayed cutoffs and Doc Martens boots, and he cleans pools and windows for a living. Ryan, however, holds a master’s degree from the most famous film school in southern California and, as the elegant, cultured, and self-controlled vice president of a motion picture studio, he dresses in Versace suits and Bruno Magli shoes.

Despite their differences, Ryan not only responds to Boon’s carefree spirit and relaxed manner, he lusts for him. And Boon discovers his craving for nude sex play with this man turns out not to be based on gratitude that Ryan saved his life, but out of love.

As Ryan wrestles with work problems that could mean the loss of the film studio, he also falls deeply in love with the one-of-a-kind Boon. But when they start appearing in public together, and a former lover makes an appearance, the differences in their social status may well destroy their future.

This was a sweet short story.  Ryan was deeply hurt by the betrayal of his previous lover and nothing has really made him take notice of anyone until he sees Boon.  Boon is afraid that their connection can’t withstand their differences, but still wants to see if it can work out.

For all his high profile life he doesn’t have much confidence in himself.  We can see his insecurities and the problems he has dealing with conflicts at home and also at work.  Until they are dealt with he definitely needs someone by his side supporting him.  Boon has enough confidence for both of them and quickly knows he needs to look out for Ryan in some ways.  They both complement each other well and work together to grow their relationship.

The cover art is nice and gives a good visual of the characters.