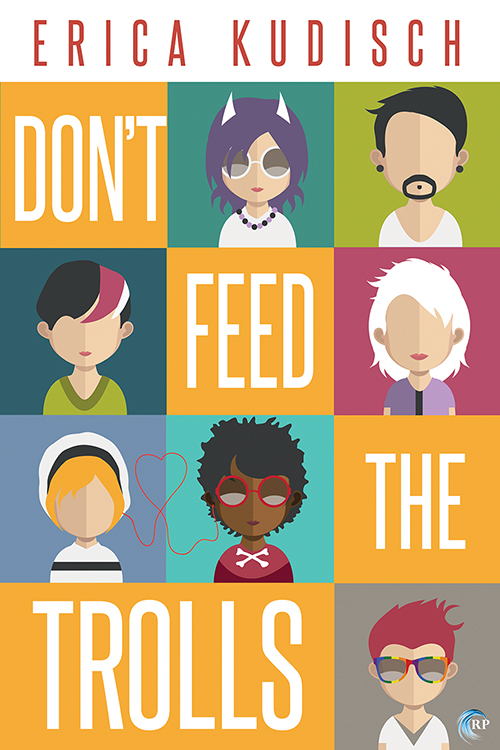 Read an Excerpt/Buy It Here at Riptide Publishing

Hey nerds! Erica Kudisch here promoting my novel DON’T FEED THE TROLLS, a genderqueer romp through internet drama. And if you keep up with the blog tour and its bonus DLC, there’s a $50 prize package achievement for you to unlock. Have fun!

In the bygone days of LiveJournal, I used to fill out character questionnaires for my favorite fanfiction muses. I’ve carried over some parts of the process to my original work, and have a few go-to memes that help me stay on track when I’m developing my main and supporting characters. And one of my favorites that I designed is this version of the Physical Description questionnaire. It was specifically created to counter the height/width/measurements memes that were already out there, which are sometimes really limiting and unhelpful.

I’ve included the template here, for all you writers and readers who think it might help with your own project–and at a future stop on this tour, I’ll use it to introduce the Three Musketqueers, the central characters of DON’T FEED THE TROLLS. Happy writing!

Without giving precise measurements, how would you describe or draw this character’s height and build?

How does this character’s shape compare to other members of the cast? Can he share shoes or clothes with anyone? Does she get mistaken for any other characters when the lights are low? What kind of hiding places can zie share with hir comrades?

How would you describe or draw this character’s coloration?

How does this character’s coloration compare to other members of the cast? Are there any strong familial resemblances? Species differences?

How about your character’s style? Haircuts, clothes, grooming habits, facial hair: do these change over the course of your story?

What does the rest of your cast think of this character’s style? Swoon-worthy, cringe-worthy, or somewhere in between? Are there any budding makeover artists in the house?

What actors, living or dead, past or present, could play this character in the live-action version of your story? What, if anything, would they have to change about themselves to satisfy your artistic vision?

What are your favorite details about this character’s appearance?

About Don’t Feed the Trolls

Gaming while female is enough to incur the wrath of the dude-bros, and they’ve come for me. Instead of fighting back, I’ve created an alternate account. Male name, male pronouns. And I’ve met this girl. I’ve always liked girls, and Laura’s adorable and smart and never gives up, and she likes me back. Or rather, she likes the man I’m pretending to be. But I can’t tell her I’m a woman without the mob coming after her too.

And besides: I might not be a woman, not really.

The truth is, I don’t know what I am anymore. I’ve spent my whole life being told how I’m supposed to act and what I’m supposed to be, but none of it feels right. And my lie is starting to feel truer than anything I’ve ever been.

There’s a convention coming up, but the closer it gets, the more I have to choose: lie or fight. But if I don’t stand my ground as a girl, am I letting the haters win?

Then again, those aren’t the only two ways to live.

Erica Kudisch lives, writes, sings, and often trips over things in New York City. When not in pursuit of about five different creative vocations, none of which pay her nearly enough, you can usually find her pontificating about dead gay video games, shopping for thigh-high socks, and making her beleaguered characters wait forty thousand words before they get in the sack.

She also has issues with authority. And curses too fucking much.

To celebrate the release of Don’t Feed the Trolls, one lucky winner will receive a $30 Riptide credit and a $20 Steam gift card! Leave a comment with your contact info to enter the contest. Entries close at midnight, Eastern time, on April 8, 2017. Contest is NOT restricted to U.S. entries. Thanks for following the tour, and don’t forget to leave your contact info!