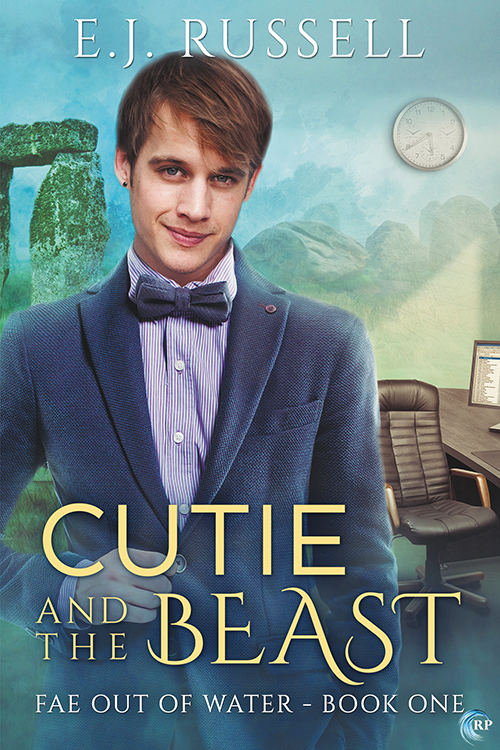 Cutie and the Beast (Fae Out of Water #1) by E.J. Russell
Riptide Publishing

Cover by: Lou Harper
R ead an Excerpt/Buy it here at Riptide Publishing

Scattered Thoughts and Rogue Words is happy to host E.J. Russell here today on the Cutie and the Beast Tour.  Check it out and don’t forget to enter the giveaway!

Welcome to the Fae Out of Water blog tour, phase one–Cutie and the Beast! I’m so looking forward to introducing you all to the Kendrick brothers and their guys, starting this month with Alun and David. As you follow along on the tours—phase two, The Druid Next Door, in August, and phase three, Bad Boy’s Bard, in September—please leave a comment and your contact information for a chance at a $50 Riptide gift card. The drawing will take place after the last Bad Boy’s Bard blog stop. Thank you so much for stopping by!

About Cutie and the Beast

Temp worker David Evans has been dreaming of Dr. Alun Kendrick ever since that one transcription job for him, because holy cats, that voice. Swoon. So when his agency offers him a position as Dr. Kendrick’s temporary office manager, David neglects to mention that he’s been permanently banished from offices. Because, forgiveness? Way easier than permission.

Alun Kendrick, former Queen’s Champion of Faerie’s Seelie Court, takes his job as a psychologist for Portland’s supernatural population extremely seriously. Secrecy is paramount: no non-supe can know of their existence. So when a gods-bedamned human shows up to replace his office manager, he intends to send the man packing. It shouldn’t be difficult—in the two hundred years since he was cursed, no human has ever failed to run screaming from his hideous face.

But cheeky David isn’t intimidated, and despite himself, Alun is drawn to David in a way that can only spell disaster: when fae consort with humans, it never ends well. And if the human has secrets of his own? The disaster might be greater than either of them could ever imagine.

About the Fae Out of Water Series

Once upon a time, there were three brothers, nobles of the Seelie Court of Faerie, who set out to seek their fortunes. The eldest—

Nowadays, when tales are told in 140 character bursts on tiny LED screens, rather than spun out by the glow of a midnight campfire, even Faerie’s elite have to get with the program.

The Kendrick brothers have traded longbow for briefcase, battle steed for Harley, and enchanted harp for electric guitar.  But while they’re finding their feet in the modern world, instead of finding their fortunes, they stumble straight into love.

Check out the Fae Out of Water series! http://www.riptidepublishing.com/titles/series/fae-out-water

E.J. Russell holds a BA and an MFA in theater, so naturally she’s spent the last three decades as a financial manager, database designer, and business-intelligence consultant. After her twin sons left for college and she no longer spent half her waking hours ferrying them to dance class, she returned to her childhood love of writing fiction. Now she wonders why she ever thought an empty nest meant leisure.

E.J. lives in rural Oregon with her curmudgeonly husband, the only man on the planet who cares less about sports than she does. She enjoys visits from her wonderful adult children, and indulges in good books, red wine, and the occasional hyperbole.

To celebrate the release of all three books in the Fae Out of Water series, one lucky winner across all three tours will receive a GRAND PRIZE of a $50 Riptide credit! Leave a comment with your contact info to enter the contest. Entries close at midnight, Eastern time, on September 23, 2017. Contest is NOT restricted to U.S. entries. Thanks for following the Cutie and the Beast tour, and don’t forget to leave your contact info!