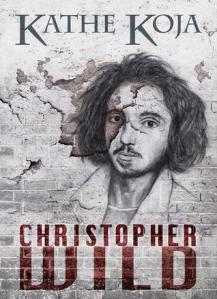 “All they that love not tobacco and boys are fools.”

Poet, spy, atheist, smoker, badass: Christopher Marlowe loved whom he pleased, said what he thought, wrote plays that turned London upside down (and blazed the trail that Shakespeare followed)—and was killed at 29, in what the government rushed to call a drunken tavern brawl.

But can a voice so passionate ever die?

Kathe Koja’s literary love affair with Christopher Marlowe takes her fiction across genres and in a whole new direction.

Christopher Wild by Kathe Koja is a book whose writing exemplifies the phrase “too clever by half”.   Divided into sections, the first part of the tale is Christopher Marlowe’s plague ridden England, where he’s an agent during Elizabethan times, writing his plays and spouting off his views about religion. Oh and having copious amounts of dangerous sex, especially with his boy, Rufus.  All told from Marlowe’s perspective in his Elizabethan English language, dense verbiage and all.  If you are a word aficionado and a lover of Marlowe or English major, then this section and story is written with you in mind.  His poetry, his beginnings, a mystery play supposedly written at the behalf of the Secret Service and his death.  It’s all here…in excruciatingly slow, dense language.  As I read, I swear I despaired of ever getting past a certain percentage.

Part of my issue with this is that I connected more with poor Rufus than I did with Marlowe.  And yes, I’m a fan of Shakespeare.  Not that it should have anything to do with it.  It was that nothing served to connect me emotionally to Marlowe the character.  I could look at the writing intellectually and think, ‘clever, very cleverly done’ and admire the narrative style.  Yet all the while bemoaning the fact that I had to drudge through the rest of the story like so much sludge.

The language only changes moderately when Christopher lands in the future. The prose flows in much the same style, however, letting one admire the phrasing, yet still removing the reader from any emotional connections to the storyline. And again, it was so slow going that I  thought I was never, ever going to finish.  Felt like double the length.   War and Peace felt moderately short compared to this at points.

I think with Christopher Wild, it will depend on what you expect out of this story.  If you as a reader are looking for drama and emotional connections, as I was, this is definitely not the story for you.  If on the other hand, you love history, consider this an imaginative exercise in what might have happened to Christopher Marlowe and his literary works and can appreciate over 300 pages done in this style of writing, well, then, this is certainly the story for you.

I don’t know.  I’ll put this away and perhaps, try to tackle it some other time.  But for now I’m onto other lands and escapades!