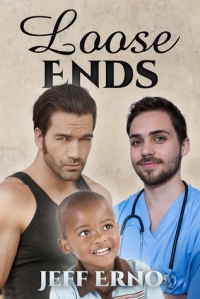 Homicide detective Tucker Brown hasn’t always made the right decisions, but one thing about his life he’ll never regret is his son Jaydin. While at the hospital for his four-year-old’s tonsillectomy, he encounters Jaydin’s nurse, Ivan Ramsey. Tucker is taken aback, however, when he discovers he’s been assigned to investigate the potential murder of Ivan’s mother.

Ivan Ramsey is a pediatric nurse, and he loves his job more than life. Raised in a devoutly religious family, he’s not yet out to a lot of people, but on the very night he chooses to come out to his mother, she dies tragically in a house fire. Devastated by the news, Ivan all but falls to pieces, and to make matters worse, a cocky, know-it-all police detective shows up asking nosy questions. The cop implies his mother’s death might not have been an accident and even infers a family member might be responsible.

Tucker and Ivan at first clash. Their strikingly different personalities are oil and water, but soon they begin to work together to determine the real cause of Ivan’s mother’s death. In the process, sparks begin to fly and a romance ignites. Ivan falls hard, not only for the sexy detective but also his adorable son.Tucker, equally smitten, has made some discoveries he can’t yet reveal to his lover. There are so many loose ends and unanswered questions for both of them, and when the truth finally comes out, it just might tear them apart.

This was a sweet story about family and love.  Ivan loves kids and working in the pediatrics unit in the hospital is the perfect place for him.  Tucker can’t help but think about his son’s nurse even though he knows he should keep his distance especially because of his job.

Ivan makes some assumptions about Tucker and his life that he soon learns are not quite valid.  Tucker is trying to solve the murder of Ivan’s mother and keep Ivan in his personal life.  Ivan needs something stable in his life when everything seems to go wrong at once and Tucker seems to be that person.

I felt so bad for Ivan when he got the news about his mother’s murderer and feeling what he portrayed as Tucker’s betrayal.  I loved that Tucker has an endless amount of patience with his son and with Ivan.  While I really liked the story the further I got into it the more name mix ups and misspellings that kept coming up and it unfortunately took away from my enjoyment of the story a bit.

Cover art by Louca Matheo is nice and gives nice visuals of Ivan, Tucker and Jaydin.