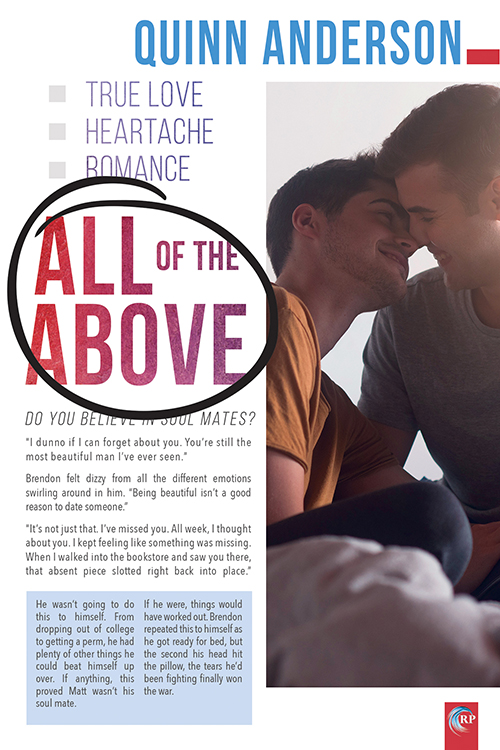 All of the Above by Quinn Anderson
Riptide Publishing
Cover by: Natasha Snow

Read an excerpt/Buy it Here

Scattered Thoughts and Rogue Words is happy to have Quinn Anderson here today on tour with her latest release All of the Above.

Thanks for joining me on my blog tour. I’m Quinn Anderson, author of the Murmur Inc. series, and I’m here to share some inside information about All of the Above, coming out November 20th. Stay tuned to hear fun facts about this novel, learn where I get my ideas from, and find out more about the characters. Leave comments on the tour posts for a chance to win a $10 Riptide Publishing gift card!

How I got the Idea for AOTA by Quinn Anderson

I get ideas for my novels from all sorts of things. Random inspiration. Song lyrics. Sometimes I even sit down and make a point of thinking up new ideas. In the case of All of the Above, I actually thought of the title first and then crafted a story to go with it. I was making dinner with my best friend, and I asked her if she wanted chocolate, wine, or a movie date for her birthday. She laughed and said, “All of the Above,” and BOOM. I thought, “That would be a perfect title for a novel.” From there, the whole thing just flowed together. By the time I’d finished plotting it, I loved how strongly the quiz/question theme ran through the narrative, all the way to a very special ending that I hope you’re all going to love!

About All of the Above

Brendon isn’t in a rut, per se—he just always seems to be in-between things. Jobs. Degrees. Boyfriends. He never finishes what he starts. The perfect path is out there somewhere, and if he can just figure out what it is, he’s certain everything else will fall into place.

The last thing he expects is to meet his soul mate in the pages of a magazine quiz. “Who Is Your Perfect Man?” by Matthew Kingston seems like a road map to his future husband: the author himself. Brendon may not have his life figured out, but if Matt is as romantic as his quiz, Brendon can check “true love” off his to-do list.

When Brendon fakes a meet-cute between them, Matt proves to be as wonderful as he hoped. The more Brendon gets to know him, the harder he falls. But Brendon has a confession to make: how can he explain to Matt that he arranged their “fated” meeting? Brendon can’t tell if he’s found his soul mate, heartache, or all of the above.

Quinn Anderson is an alumna of the University of Dublin in Ireland and has a master’s degree in psychology. She wrote her dissertation on sexuality in popular literature and continues to explore evolving themes in erotica in her professional life.

A nerd extraordinaire, she was raised on an unhealthy diet of video games, anime, pop culture, and comics from infancy. Her girlfriend swears her sense of humor is just one big Joss Whedon reference. She stays true to her nerd roots in writing and in life, and frequently draws inspiration from her many fandoms, which include Yuri on Ice, Harry Potter, Star Wars, Buffy, and more. Growing up, while most of her friends were fighting evil by moonlight, Anderson was kamehameha-ing her way through all the shounen anime she could get her hands on. You will often find her interacting with fellow fans online and offline via conventions and Tumblr, and she is happy to talk about anything from nerd life to writing tips. She has attended conventions on three separate continents and now considers herself a career geek. She advises anyone who attends pop culture events in the UK to watch out for Weeping Angels, as they are everywhere. If you’re at an event, and you see a 6’2” redhead wandering around with a vague look on her face, that’s probably her.

Her favorite authors include J.K. Rowling, Gail Carson Levine, Libba Bray, and Tamora Pierce. When she’s not writing, she enjoys traveling, cooking, spending too much time on the internet, playing fetch with her cat, screwing the rules, watching Markiplier play games she’s too scared to play herself, and catching ’em all.

To celebrate the release of All of the Above, one lucky winner will receive a $10 Riptide gift card! Leave a comment with your contact info to enter the contest. Entries close at midnight, Eastern time, on November 25, 2017. Contest is NOT restricted to U.S. entries. Thanks for following the tour, and don’t forget to leave your contact info!

4 thoughts on “Quinn Anderson on the Inspiration for her latest novel ‘All of the Above’ (guest blog, tour and giveaway)”