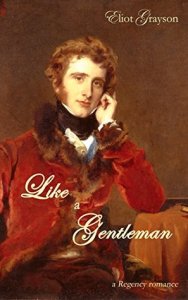 James Rowley, penniless younger brother of an earl, discovers his rejected sensational story has been stolen and printed under another name — and he’s certain his editor is the guilty party. Determined to get his due, he sets out for London to take revenge on the perfidious L. Wells. He means to have satisfaction, even if he needs to pose as a simpering fop in a pink waistcoat to get it.

Two years before, intrigued by his favorite writer’s talent and wit, Leo Wells had visited the Rowley estate incognito, seen James’s portrait — and promptly lost what was left of his heart. Ever since, Leo has fought his obsession with his favorite writer. Unaware of the manuscript’s theft, he’s bewildered and heartbroken when James, acting the part of a sneering dandy, visits him in person only to use his obvious attraction against him.

From Gloucestershire to London to Portsmouth, can two men with society and secrets dividing them find happiness?

I’m not a huge fan of historical MM romance and I’m always picky about the books I decide to read cause I don’t want to end hating them just because they are not set in the contemporary time. Nonetheless I wanted to have Like A Gentleman on my Kindle as  soon as I read the blurb, it strongly interested me and at the end the author, a new to me author, didn’t disappoint me at all.

This was a quick read, just a little more than 60 pages but they were very well done. Eliot Greyson simply succeeded in the greatest way possible with Like a Gentleman. I was able to find here everything I always look into my readings, well written words, engaging world, the characters built and likeable. I found myself into a good defined plot made of passion and revenge. And the chemistry between James and Leo was explosive. And there was some sweetness too. I couldn’t ask for more.

I’m now writing this review and to be honest, I want to reread the story, so yes, I’m going to do it right this second. Highly recommended if you are a fan of Regency romance or not, like me.

The cover art is simple and fitting to the era. I don’t despite it but I don’t love it either.