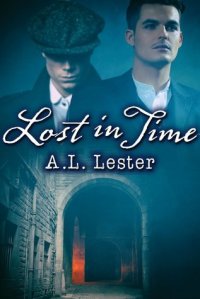 A.L. Lester is a new author to me, and I was looking forward to reading a historical set in post WWI Britain.  Warning:  this book is the first in a series (the blurb didn’t say that) and it’s a cliffhanger.  The blurb, also, is a little misleading.

Lew is introduced just as he is looking for his sister Mira, who disappeared while working The Border, Pulling for her perfect job.  He set up the ritual in the usual way, but the result was disastrous, and he found himself waking up in London in 1919.  With just the clothes on his back, and no way to get home, he was lucky to witness an accident that allowed him to assume another man’s identity and belongings, and he got a job as a photographer covering the police beat for a local paper.

Two years go by, and Lew is still looking for Mira, when things finally start coming together.  His friend and fellow Worker Archie introduced him to another Worker and they Pulled again, and found Mira.  Why it took two years, or why the author felt it was necessary for it to take two years, I have no idea.  At the same time, the Creature who followed him across The Border from the Outlands also started killing, leading to grisly murders where the victim’s brains were liquified, confounding the police and the medical examiner.  Why the Creature didn’t start killing immediately is also not satisfactorily explained.  When the Creature kills Archie, Detective Inspector Alec Carter is assigned to the case, and it is very clear to him that Lew is hiding something.

As the killings continue, Alec and Lew keep being thrown together, and ultimately Lew is forced to tell Alec that magic really does exist, that it brought the Creature into London, and only magic will allow them to kill it.

The first 30% or so of the book was painfully slow, and annoyingly poorly written.  I probably would have DNF’ed the book if I wasn’t reading it for review.  There were abrupt, disjointed changes from Lew’s point of view to Alec’s, as well as skips to months and years ahead, and I really couldn’t see why all the time was necessary.  Secondary characters were introduced as if they would become important, only to be dropped.  I really had no idea where the plot was going, the characters were kind of boring, and though the world building for The Border, those who Worked it, and the creatures of the Outlands was interesting, it always felt unfinished.  I was all set to give this book a low rating and assign the author to my “don’t bother” list, when finally, FINALLY the plot picked up.  The writing improved, the characters became much more three dimensional and interesting (including poor Archie – it was only after he was dead that I learned enough about him to be sympathetic to him), and the relationship between Alec and Lew actually developed.  There is actually very little romance in the book (I would have liked more) and sex was all fade to black (which I am OK with).

I am invested in the story now, and I do want to see how it works out, so I will probably read the next book.  I am just hoping that it will be better written.  This is not the author’s first book by a long shot, so I was surprised that it wasn’t a lot smoother, with a more consistent pace and better editing to eliminate all the extraneous loose ends.  The plot was interesting enough to bring up my final rating to a 3, but for those who get the book, be prepared to slog through a lot of junk to get to the good stuff.