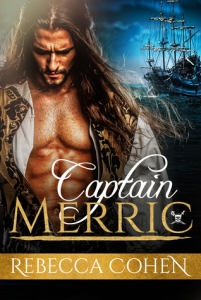 A tale of pirates, lost love, and the fight for a happy ending.

After he’s set adrift and left to die by his mutinous crew, the last person Royal Navy officer Daniel Horton expects to come to his rescue is Captain Merric. An infamous pirate, Merric is known as much for stealing his victims’ hearts as their jewels. Daniel’s world is about to be turned upside down when he recognises Captain Merric as none other than Edward Merriston, someone he thought he’d never see again.
Edward can’t believe Daniel Horton is aboard his ship. While Edward is willing to do anything he can to get a second chance at their happy ending, Daniel isn’t interested in digging up the past. But Daniel is one priceless treasure Captain Merric isn’t about to let go of without a fight.

Captain Merric first appeared as short story in a pirate-themed anthology. Now completely rewritten and extended he is ready to set sail again.

There’s nothing more fun than lust and love on the high seas so I was happy to sink into the new release Captain Merric by Rebecca Cohen.   I’ve enjoyed many of Rebecca Cohen’s historical romances in the past and this one turned out to be just as delightful.

It has not only a lusty pirate but one who turns out to be the the ex lover of Royal Navy officer Daniel Horton, one that Daniel had long thought dead.  Captain Merric, ne’ Edward Merriston, had also been laboring under some false assumptions about his old lover making their reunion highly emotional and  fraught with danger to them both.

I have always loved Cohen’s ability to bring her characters to life.  Whether they are shouting in anger, or trying to convince the man they have always loved to kiss him again, you believe in them.  And feel connected to them emotionally.  The story switches pov so you are able to see all the turmoil and actually fracturing of the foundation each man’s has built up over the years apart as the real story behind their separation comes out.  As this is going on, you get the glimpses into the pirate’s life that Edward has been living, quite happily as it seems.  From the island he lives on to the crew of his ship, we get the full picture of the man now called Captain Merric.

Poor Daniel Horton has lead a much colder, hard life and that is also left by the lack of explanation in the storyline.  It sort of works here.  But I wish that we would know if that contributes to the fact that none of his crew attempts to help him at the beginning of the book other than one person.  More of Daniel’s past would have made Daniel a more rounded character just as Edward was.

There are some things that, for the sake of the story, I just accepted, in terms of timing or coincidence, or just plain no I don’t think they would have accepted that.  But I was enjoying the story too much.  And I  loved the way the author got the men back together at the end.  What a lovely and downright sneaky touch.

When it comes down to it, I loved the characters, the writing flowed so smoothly that you were finished with the story before you realized it, the descriptions were colorful and made you see it clearly.  Ah, I just loved this romance!  I think you will too.  It’s definitely one I recommend.