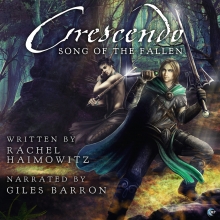 Bridging the hatred of centuries did not come easy for Freyrík Farr and Ayden Vaska. As prince of a war-torn human province, Freyrík could ill afford to fall for an enemy. And Ayden, an elven warrior with three hundred years of bitterness in his heart, wanted no part of love. Yet they came together despite themselves and the wills of their peoples, joining hearts and minds to fight a race of Dark Beasts threatening the extinction of mankind.

Yet the Dark Beast threat pales beside the dangers of a summons to the human High Court, home of the Aegis Exalted and the harshest test yet of Ayden’s and Freyrík’s fledgling love.

When the Aegis strips Ayden of his magic, Freyrík is forced to choose between his love for elf, Aegis, and king, all the while seeking the one uncertain path that might save his doomed race. Time is fast running out for mankind, and only by making peace amongst themselves and with their ancient elven enemies can they end the Dark war—and undo the tragedy that’s plagued humans, elves, and Dark Beasts alike for the last three hundred years.

This was an action packed and super emotional sequel to Song of the Fallen.  It picks up a few weeks after the end of the previous book.  They are headed to see the human king and when they arrive things go poorly.  Freyrick and Ayden are separated and Ayden is made a slave.  From this point on things go from bad to worse.
For much of the book the two are not together.  Freyrik is working through his own issues and how he feels about the behavior of other humans and Ayden is trying to figure out how to free the other elf slaves.  It wasn’t until the very end that I was sure things were going to work out for the two men.
I think this would have been a higher rated book for me if it weren’t for the rushed ending.  This was a pretty long book and as I previously said, the two MC’s weren’t together for much of the story.  Then all of a sudden we get an epilogue with a HEA.  It felt abrupt to me and I felt like between books one and two I had spent a lot of time with this couple.  I wanted more of the happy ending with them.
The audiobook was narrated by Giles Barron who I thought did a great job with both of the main characters as well as the many side characters.  This is not the same narrator as book one but it I took a really long time between them so this was not as issue for me.  I’m just noting it for people who are doing the books back to back.
Overall I really enjoyed this book and felt it was a good conclusion to this story.  I highly enjoyed the audio version and would definitely recommend that.
This cover was done by Simone and I think the cover is really well done and it fits perfectly with the cover for book one.
Sales Links:  Riptide Publishing |  Audible, Amazon, iTunes
Audiobook Details:
Audible Audiobook
Listening Length: 11 hours and 2 minutes
Program Type: Audiobook
Version: Unabridged
Publisher: Riptide Publishing
Audible.com Release Date: April 12, 2018
Language: English
ASIN: B07C325RN6