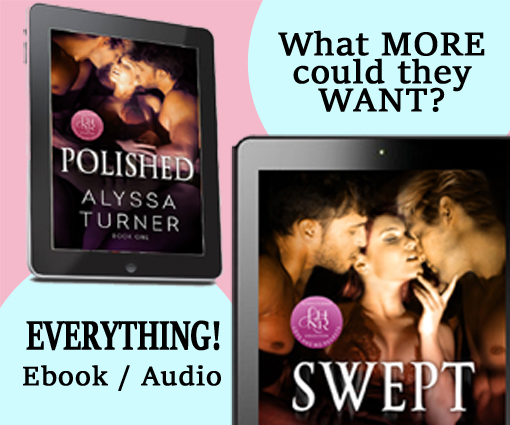 Read it and get lost in their story…Listen and find yourself in the center of it!

Start with Book One, Polished.

It seemed like they had everything, but they didn’t have Jack.

Without question Spencer Hartley burns hot for his girlfriend, Rory, but his other desires are hidden down deep. He might blow things up for a living and climb mountains for kicks, but the scariest thing in his life is the truth about his sexuality.

Jack Rothman works hard and plays dirty. After long, demanding days in his family’s engineering firm, he indulges in the pleasures of silk restraints and fine wine. Lots of hot meaningless sex helps him forget that he’s suffocating, with no one to give him a reason to breathe.

When a catastrophic accident traps Spencer in a flooded subway tunnel with Jack, they need each other to survive. But something strong stirs down there in the darkness, and it’s more than their desperation to live. There’s a spark between them that’s impossible to ignore.

Rory Campbell would love to give Spencer the one thing he doesn’t have, the freedom to explore his secret desires. But how does that fit into her picture-perfect relationship? When Jack invites the couple to his sprawling Hamptons beach house, Rory realizes that she has secret desires of her own—the kind only Jack’s Dominant hand across her bare bottom can satisfy..