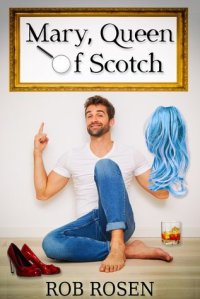 Four five-star Yelp reviews do you little good when you’re nailed inside a giant barrel of whiskey, which is where our intrepid private detective Barry finds himself while on the case to help his campy drag friends, all of whom have numerous secrets to hide.

If he can decide between the man he once loved and the bartender he’s falling for, successfully stay undercover as his alter-ego, Mary, Queen of Scotch, and keep one step ahead of the bad guys, plus a raucously funny meddling mom, he just might live to see that much-desired fifth review.

One of the things that just does it for me in a novel is well done dialog.  When an author nails it, has his character’s personalities fleshed out  so well, so dynamically that the words flying out of their mouths just snap with life, a vitality that rocks the reader’s world….well, job well done!   If that author can do it for more than one character but an entire cast?  Kudos and scotch.  In this case, a barrel full.

I will admit it almost did him in the beginning.  That first chapter where Barry explains, from the inside of a barrel of whiskey, how he got to the state he’s in was a little too scattered, too too, even for me, a lover of the big personality and free form inner conversations.  At places, you almost got lost in who Barry was and what was happening to him.  Luckily, Barry get the exposition out of the way. We understand that he’s a private investigator on a new case that entails him becoming a drag queen and, boom, there we are, hooked into another wonderful, weird Rob Rosen  adventure.

I was not prepared to find that my first loves in this book were Barry’s parents!  Jewish, hilarious, smart, devoted to each other and their son, the relationship between his mother and dad, parents and son, were among some of the best (and funniest) in the story. Each scene, whether with the mother or dad could have potentially veered into comedy because of the crackling dialog but the layers of understanding and love that hold those scenes up elevate above meer laughs into the acknowledgement and joy that comes from  the snarky back and forth salvos obtained from poking at people you care about.  That glint you see in the eye, that up turn on the side of the mouth before a comment is made.

And as always Rosen’s characters are a roll call of complexity, grittiness, depth, and, brash pizazz!  Most of them have been through the worst and still gotten back p on their Louboutin’s and started lip syncing.  How I love his drag queens!  This author gets under the skin of what it feels like to be a  drag queen, to be part of the sisterhood and pulls the reader in as well.

There’s a nifty mystery, a pretty realistic resolution, and yes, HFNs all around.  Barry and company are clearly I need to spend more time with, on and off the stage.   That includes his parents!

There’s romance, one Barry figures stuff out, lots of sex, mystery to solve, and all the wonderful characters and dialog this reader could want.

Even a Preface and a Afterword.  Don’t’ miss those.  You know I never do.

I love this author and Mary, Queen of Scotch is simply another great reason why.  The writing is wonderful.  the plot interesting and well made, and the characters easily people to take to heart.  I highly recommend it.