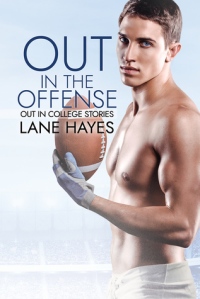 Christian Rafferty is a quarterback at a small private college. He’s determined to both win another championship and keep his father off his back about his future plans. He might not graduate, though, unless he gets help with statistics.  Math is not his friend.

Rory Kirkland is a former wrestler and recent college grad who tutors and coaches wrestling at the Y. He’s an out and proud bi man; and he recognizes something of himself in Christian when they meet over coffee to discuss statistics.

I love Lane Hayes’s writing style and her characters are always fresh and interesting, well-rounded and generally likeable.  However, in this story that’s about all I liked—the characters.  Christian and Rory were two nice guys, who meet, fall in love, and that’s it. Oh, did I mention Christian is deep in the closet? Well, that’s the crux of the matter. And, of course, he has religious parents and a father who has his career all mapped out for him, and he worries about all of this throughout most of the book.

So I enjoyed the story of Christian and Rory, but there was nothing distinctive about it, nothing to make it stand out from others—just the same old basic plot twist. To be honest, I was bored.  I kept hoping for more, but it was same old… The excitement came toward the end when Christian was outed to his football team and then told his father who, as expected, stopped speaking to him.  The young men found their HEA together, however, and all is well in their world.  The end.

The cover by Reese Dante features a bare-chested handsome young man holding a football and wearing football uniform pants. The style is similar to other Lane Hayes books in the series.