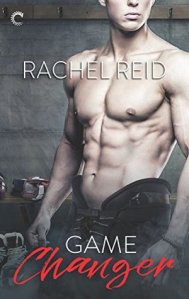 New York Admirals captain Scott Hunter takes his pregame rituals very seriously. In this case, it’s not just a lucky smoothie he’s craving—it’s the man who made it.

Pro hockey star Scott Hunter knows a good thing when he sees it. So, when a smoothie made by juice bar barista Kip Grady precedes Scott breaking his on-ice slump, he’s desperate to recreate the magic…and to get to know the sexy, funny guy behind the counter.

Kip knew there was more to Scott’s frequent visits than blended fruit, but he never let himself imagine being invited back to Scott’s penthouse. Or kissed with reckless abandon, never mind touched everywhere all at once. When it happens it’s red-hot, incredible and frequent, but also only on Scott’s terms and always behind his closed apartment doors.

Scott needs Kip in his life, but with playoff season approaching, the spotlight on him is suddenly brighter than ever. He can’t afford to do anything that might derail his career…like introducing the world to his boyfriend. Kip is ready to go all-in with Scott—but how much longer will he have to remain a secret?

Once again, I backed into a series, this time starting with book 2 in the Game Changers series by Rachel Reid, called Heated Rivalry.  It’s a hockey player/game oriented series with each story supposedly a standalone, and yes, after starting with book two , I can say that’s true.  But now after reading the first story Game Changer, I can also say that together, now having read Game Changer?  It adds a richness and appreciation to scenes of great importance in Heated Rivalry that I missed my first reading. Yes, I had to go and read book 2 again after finishing this one.  It made so much more sense having this as a foundation for that story and characters.  So again, I wish I had read one and then immediately the second story as their timelines are happening almost simultaneously.

While you don’t have to be a fan of the NHL and hockey or follow the sport, it helps to understand the hockey mentality and the pressures the players are under while playing this sport (and practically any sport these days).  How many of you can count out athletes still playing?  Right….you can use one hand for most sports.  The pressure to remain closeted is enormous and Rachel Reid captures that well in the character of Scott Hunter, hockey star and deep in the closet gay.  Who intends to stay there until he meets Kip in a smoothie bar and has his world and feelings turned upside down.  As does the decidedly out Kip.  Because being closeted effects not only the person hiding but everyone he’s involved with.  How that affects Kip, his life, mentally, emotionally…is very effectively laid out for the reader, Kip, and eventually for Scott in a revelatory scene.

I fell in love with these characters through the development of their relationship which felt very realistic, highs, lows, career concerns and pressures, and personal hurdles and journeys to take.  It made the story finale all the more heartwarming and a true highlight.  For both books!

Now I can’t wait to see who or what is the inspiration for the next installment in the series.  I have loved both couples and novels.  I am dying to see what happens next.  Of course I highly recommend Game Changer and it’s followup Heated Rivalry.    Read them both together for a tremendous heartwarming hockey romance experience!

Cover art by Carina Press.  I wish there was more color and something to help catch the eye.  Simply a gorgeous torso isn’t really enough to help tell the story these days.