Jeff Adams on Writing a Teen on the Run in “Netminder (Codename: Winger #4)”

High school hockey player/computer genius/covert agent Theo Reese has been through a lot in the Codename: Winger series—from going on his first field mission, being injured in the line of duty and wondering who he can trust. In Netminder, the final book in the series, he’s forced to institute emergency protocols that he and his parents never thought they’d use.

He ends up on the run and cutoff.

Writing Theo on the run was interesting. He’s an agent with limited experience who has to be careful with every move because he has no idea what might happen. At the same time, he’s needs to find shelter for the night where he can try to figure out his next move. Of course he’s also a teenager without all the experience of an adult agent so he must work to keep his emotions in check.

The on-the-run element makes Netminder the most action packed installment of the series. Theo’s on a mission from the very start of the book—even if he doesn’t realize immediately what that mission actually is.

If you’ve been reading the series, I hope you find the conclusion satisfying. If you’re considering starting the series it’s a great time because Tracker Hacker, which is book one, is on sale during June 2019 for 99cents for the ebook. You’ll find that deal at all ebook outlets.

Meanwhile, here’s an excerpt that features Theo attempting to get a hotel room just a few hours after he took off from home on his bike.

The hotel looked decent. Surprisingly, it had a bike rack near the front door, which was even under an overhang. Now I wouldn’t have to talk them into allowing me to bring the bike to the room, so it didn’t get further soaked.

I took off the helmet and hung it off the handlebars. Looking around, I tried to take in everything as I ran my hand through my hair to dry it out as best I could. I pulled the lock from my pack and secured the bike.

Putting on my best confident look, I slung the pack over one shoulder, took my helmet in hand, and went for the door. The lobby was warm and made me shudder. I hadn’t realized how cold I’d become.

“Good evening, how can I—” The woman at the front desk stopped short as she looked up and saw my disheveled state. “Goodness. You got caught out in it. How can I help you? Checking in?”

She looked unsure, but at least she wasn’t telling me to get out as I dripped on the tiled floor. “I hope you’ve got a room. I was out cycling, trying to beat the storm and failed.”

I tried not to let my teeth chatter and sound like it was normal for someone to be on a bike on a night like this as if they were headed somewhere even farther away. It didn’t help that I looked my age. Some of my classmates could easily pass as college age, but I looked like a high schooler. Usually I didn’t care, but tonight I needed to sell being older.

“I have some rooms available, yes.” She continued to sound unsure. “I’m sorry, but I have to ask, are you over eighteen? I can’t give a room to a minor.”

I smiled, wanting it to look like I got this all the time. “Oh, yes, of course. Let me get you my ID and credit card.”

Dropping my backpack to the floor so it would only add water to the existing puddle, I retrieved the wallet with my fake driver’s license and the cards. The Massachusetts driver’s license identified me as Jason Robert Karr, age eighteen, along with a MasterCard that would get me through this transaction. Before I stood I slipped my regular wallet into the pack since I didn’t know when I’d be Theo Reese again.

I handed over the cards.

She studied them and then smiled apologetically as if sorry for doubting. “Do you have any room preferences, Mr. Karr?”

“Anything with a hot shower is fine.”

She nodded and clicked away on her keyboard. “Checking out in the morning?”

I hadn’t considered that. If I stayed here, I’d have a base of operations and Wi-Fi. If I wanted to get farther from Boston, I should arrange a new ID. Renting a car was tough if you were under twenty-five. I had to figure that out tonight.

She studied her screen. “We can accommodate that.” She typed more, talking as she went. “Are you on a bike trip or something? I saw you ride up.” She gestured at the doors where my bike was visible.

“Yeah.” I wasn’t going to debate the cover she created for me. “It’s been great. Until tonight.”

She smiled and nodded as she ran the card key over the device that coded it for my room.

“You’re all set. Second floor, room two twenty-five. Elevators are just down the hall on your right. We have a continental breakfast served from six to nine. If you need anything tonight, there are vending machines on each floor and there are a couple of places that deliver as well. Can I do anything else for you?”

“Is there a laundry room? It’d be great to dry these things out.” I gestured at my wet clothes.

“Oh yes, of course. On the third floor in the corner.” She pointed. “If you’ve got some cash, I’ll give you some quarters.”

I dug five dollars out of my wallet and traded it.

“Thank you. I wouldn’t have thought of that right off.” She smiled again. I guess somehow I’d charmed her. “Thanks so much for your help.”

After a summer that was nothing like he’d planned, teenage secret agent Theo Reese is back to school and to work with Tactical Operational Support’s IT department. His world turns upside down arriving home from hockey practice to a major security breach.

On the run, he soon discovers the TOS network is down and he’s cut off.

As he uses his unique skills to find out what’s happened, Theo discovers the evil agency Blackbird is responsible. A nemesis from Theo’s first field mission is out for him and will stop at nothing to force Theo to help Blackbird realize their goal of taking global control of the internet.

Getting help from some unexpected sources, Theo must stop the internet takeover while trying to keep those closest to him safe. 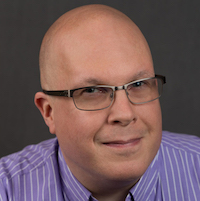 Jeff Adams has written stories since he was in middle school and became a published author in 2009 when his first short stories were published. He writes both gay romance and LGBTQ young adult fiction…and there’s usually a hockey player at the center of the story.

Jeff lives in northern California with his husband of more than twenty years, Will. Some of his favorite things include the musicals Rent and [title of show], the Detroit Red Wings and Pittsburgh Penguins hockey teams, and the reality TV competition So You Think You Can Dance.

He also loves to read, but there isn’t enough space to list out his favorite books.

Jeff is the co-host of the Big Gay Fiction Podcast, a weekly show devoted to gay romance as well as pop culture. New episodes come out every Monday at BigGayFictionPodcast.com.

Learn more about jeff at JeffAdamsWrites.com.

Tell me your favorite book or movie featuring an extraordinary teenager? Leave a comment before end of the day on June 5. Two commenters, picked from random, will win an ebook copy of a Codename: Winger book of their choice.

7 thoughts on “Jeff Adams on Writing a Teen on the Run in “Netminder (Codename: Winger #4)” (guest post, excerpt and giveaway)”