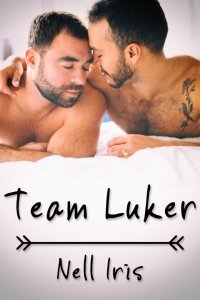 What if this is the last time we lie like this?

What if Jools suffer from the same disease that stole Ellery’s mother when he was just eleven?

What if all Ellery’s worst fears come true?

This is a super short (14 pages of content) glimpse into a fearful time for Ellery and Jools Luker.  Team Luker “…since that day Jools told his mother about us, told her that he was gay and that we were serious about our relationship.” We get this in a flashback to how they met and how they really became a team.  Ellery is terrified that the biopsy Jools has had for colon cancer will be malignant.  Ellery is a worrywart but with good reason – when he was eleven his mother died of cancer.  Hard to think positive in that case.

It’s endearing that Jools, the one who is actually facing a possible diagnosis of a life-threatening disease, is the calmer one and the one to calm Ellery down. “And if it is what we fear, Ellery, I fight.  I fight like hell, because I’m not leaving you, you hear?”

While this really is just a scene from their lives, it is a powerful one.  More so for me because my husband and I have been through the cancer battle and I can totally relate to those fears and the feeling of uselessness you have when you can’t help or change things.  The love between these two men shines through.

I thought the author did a superb job in giving us Ellery’s fears and feelings without making him seem over dramatic.  He seems real and that made this powerful.

Cover art is simple, Ellery and Jools in a quiet moment and I thought it fit perfectly.