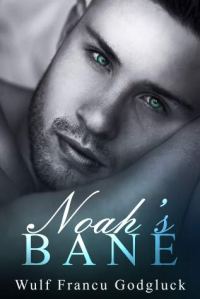 Finding his very own Daddy is harder than finding Prince Charming.

Then…
A mysterious contract.
No strings attached.
Never to know the Dominant’s identity.
Noah clings onto his only hope, a man he can call Daddy.

Cold, ruthless, charismatic. Bane Rozek believes himself impenetrable. He built his empire, fabricated from lies, blackmail, and extortion. Dark secrets he holds in his palm could cripple the most powerful of people and organizations. It’s all a lie, a simple illusion to hide his truth.

He did it all, built his fortress and claimed his power and sovereignty, for her. But Bane knows Death’s chaste kiss intimately. What Bane wants is a connection.

This time on his terms…
An innocent boy offering the purest submission.
A contract holding them both at a distance.
A boy that tugs fiercely at Bane’s dark heart.
If only Bane could believe himself worthy to be the Daddy Noah proclaims to love.

Finally a new release from one of my favorite author and finally he wrote a happy ending.  Noah’s Bane is an interesting story, I think I never read about a contract between  a sub and a dom where the sub couldn’t known the dom’s identity. Still, Noah easily falls in love with his dom, but then he ruins everything when he shares his feelings with the other man. Noah can’t take it anymore, his heart is too full to be quiet and respect the contract.

Bane is a mess, he thinks he’s not worthy of the sweet sub love, his life is too dangerous, too dark, to be mixed with Noah’s. But then things changed and he’s now too weak to stay away, he needs his boy and he’s ready to show who he really is.

This story is beautifully done, Wulf wrote about a lot of emotions, love, grief, loyalty, friendship and so many more. I have to say I cried a little cause in a couple of moments the plot cut deep in my soul. It was clear from the beginning how the main characters were connected, how much they cared for each other, and even when reality took a bad turn (I don’t want to spoiler anything), the author did an amazing job at showing me how awful they were alone. Of course we’re talking about Wulf’s stories, so don’t expect flowers and candies, but if you’re familiar with his other works, this new release is surely within everyone’s reach, for everyone who’s not to comfortable with really dark themes, here you’ll find just a tiny bit.

I thought this was going to be a standalone book but I see it’s instead part of the Lormount City series, I can’t wait to learn where the author will take me with the next installment

The cover art by Book Cover by Design is awesome, I love it, it’s eye catching!