Mia Andersson is not a nice person. She is a sharp, sensational-looking, aloof lawyer-to-be, and the busiest sapphic player in town. Mia Andersson takes no prisoners, tells no tales, and if you gave her your number, chances are she won’t call. But this holiday season, at age twenty-seven, wheels that are out of her control have been set in motion, and it looks like she might just get caught in the spin.

Linda Ling was all that. From the moment Mia had first set eyes on her, at the band’s premiere gig at Blekingska back in October, she hadn’t been able to not see her: Linda Ling turned up in her dreams at night, in her thoughts by day, in casual conversation between classes, in the distance along the streets of late-autumn, early-winter Lund. She was on posters, in clubs, in the air, and—God help her—in Mia Andersson’s masturbatory fantasies. The spiky, jet-black hair, the punk-goth pallor, her slight, androgynous build, the calculated raggedness of her clothing: black netting, torn edges, charcoal and purple stripes. The ankh tattoo at the nape of her neck, which Mia had glimpsed, teasingly, only once at the university library, where she had happened to spot Linda embroiled with a gaggle of friends-cum-admirers, her hair gathered in a messy I’ve-got-brains-too bun to mark the occasion. She had a piercing, as well: a stud below her full, pouty bottom lip, and each and every finger of her hands was adorned with at least two fancy, industrial-sized silver rings. Her eyes were an intense shade of violet, which Mia suspected must be the product of tinted contacts, but it didn’t matter, or rather, it merely added to her attractions—because Linda Ling was so attractive it was unreal.

And Mia Andersson was not in the habit of not having got her leg over that already.

True, Linda was four years her junior, but Mia wasn’t usually squeamish about that sort of thing: she was twenty-seven, not eighty-three. And she’d bet her favourite, well-worn Ramones tee Linda Ling wouldn’t mind a slightly older, a lot more experienced lover.

This wasn’t so much bragging as a statement of facts; Mia Andersson had been a player of, more or less, the exclusive sapphic variety since she had turned fifteen. She had been sexually active for well over a decade, and she had turned her fair share of blushing bi-curious virgins into raging rug munchers. Her gaydar was impeccable. If there was even the slightest possibility, the most infinitesimal potential of queer in a girl, Mia brought it out and honed it to glimmering perfection, before releasing her back out into the wild. Mia Andersson was a dykemaker. It was just her thing.

There was only one problem—one which, despite her being closer to her cool thirties than her red-hot twenties, Mia couldn’t recall ever having run up against before. She was miffed. She was stunted. She was flabbergasted.

Linda Ling was, to all appearances and in spite of her heavy, enticing, smouldering andro vibe, completely, irredeemably, one hundred per cent and counting, straight.

The mere thought caused Mia’s upper lip to curl in distaste, her hand gripping the neck of her beer bottle spasmodically. She just couldn’t accept it, and the non-acceptance had turned into a minor obsession—to the point where Mia Andersson, the Malmö-Lund region’s busiest lesbian lay, had gone a full thirty days (an entire month!) without getting any action. Her frustration was verging on palpable. She needed another drink.

Turning abruptly away from the low stage where Linda and her band members droned out their latest dour-faced dirge—the Raven Choir they called themselves, or something along those lines; to be honest, Mia wouldn’t have given them a second glance, much less paid the price of a ticket, if it hadn’t been for the fact that their lead singer was, well, all that—Mia made for the bar. Or, that was the plan; in reality, she ran crotch first into a froth-tipped pint of lager.

Eyes of an indeterminate colour regarded her, from out of a tan face shaded by the stiff peak of a light-blue football cap.

“Unexpected move.” The person to whom these iconoclastic features belonged cocked her head, and a devilish glint came into those previously oh-so-innocent eyes right before she added: “Bet I got your knickers wet in record time, though.”

Mia ‘the Dykemaker’ Andersson was at a loss for words. Slack-jawed with disbelief, she simply stared down at the woman seated—of course, it had to be, this close to the stage—in a sleek purple wheelchair, a now half-empty glass of beer in hand. Or half full, depending on your outlook on life, etc. There was something oddly, disturbingly familiar about her.

The woman switched her glass over to her left and held out her right hand.

“Sandra Ling,” she drawled, and everything came together, all at once, as Mia darted a look back up at Linda, who was, mercifully, not turned in their direction.

“That’s right,” Sandra nodded as she shook Mia’s limp hand vigorously. She had some grip on her; that was for sure. “Twins. I know. I know. It’s not fair; how come I got all the looks and talent?”

Mia snorted, half in shock, half in amusement.

“How is that—” She stopped, not really certain where she was going, what she was saying. Besides, her jeans and—yes, her underwear, too—really were soaking. In a non-sexual, not comfortable at all way. “Fuck, I’m wet!”

Sandra sucked her lips in over her teeth, giving her a frog-like appearance. Kind of—no, not kind of, just cute, actually.

“Yeah, jokes aside, I’m sorry about that. I was just about to—well, never mind.”

Mia shuffled her feet. There was a puddle on the floor, starting to give off that classic old-drunk reek, and she felt about as fresh and alluring as if she had pissed herself. And here she was, chatting to a stranger. A girl in a wheelchair. Linda’s sister. Her twin.

Sandra sat back in her seat, lifting herself up a little on her forearms. Her torso was—square, almost a perfect square, there was no other way of putting it.

“I’ll keep a look out for you. When you get back, I mean. I think I owe you a drink or something. What did you say your name was?”

Sandra’s lips twisted into the subtlest smirk Mia could recollect ever having seen, except—well, except when she happened to catch sight of her own reflection. 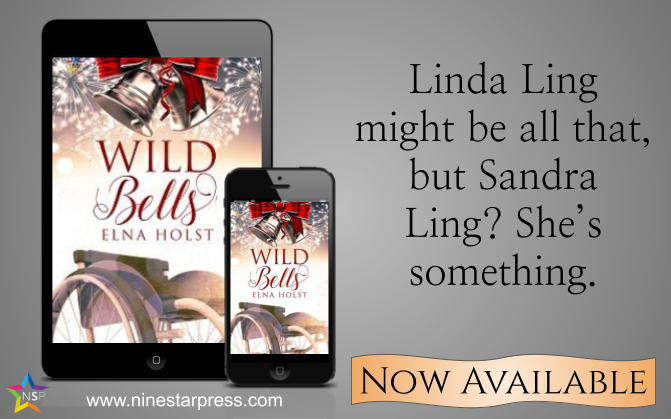 Often quirky, always queer, Elna Holst is an unapologetic genre-bender who writes anything from stories of sapphic lust and love to the odd existentialist horror piece, reads Tolstoy, and plays contract bridge. Find her on Instagram or Goodreads.