Tyler Coil and his his best friend, gorgeous Landon Burke, have been best friends since college.  Landon, a cancer researcher, and Tyler, a politcal reporter, have remained close even though they no longer reside in the same city.  Landon has secretly loved his best friend for years, just watched as Tyler dated one woman after another, never seriously.  Now Tyler has come to stay with Landon at his apartment for a time while working on a report.  Landon is getting ready to buy a condo and take a sabbatical for 6 months in another city.  The time is ripe for change in their relationship.  Will Landon take a chance on love or let his dream of happiness with Tyler go?

I have mixed feelings about Waiting for Ty.  It is the second book in the Lovers and Friends series by Samantha Ann King.  The first book, Sharing Hailey (Lovers and Friends #1) is a menage (m/f/m) book that contains a fair amount of back story missing from this book.  But as menages are not my thing, I won’t be reading that one.  And without that information, much of this book feels incomplete as the author did not take the time to build it into her narrative. And that is just one of the issues with Waiting for Ty.

The story opens with Ty visiting Landon in his rental apartment just as two important events in Landon’s life are about to take place.  He is finally finished with his years of college, including graduate degrees and is working as a cancer researcher.  He has bought a condo and has agreed to take a 6 month sabbatical from his current position to work with another research group in a different state.  And in walks Ty.  Tyler is in town to meet with a informer for a explosive political expose’ he is working on.  His entrance and the start of the novel is so abrupt that we feel as though we have entered midway through the novel.  The reader is given little to no back story as to the men or their history together.  It is just so odd that it is almost impossible to feel engaged in Landon’s predicament or their relationship.

Once the plot moves forward and the men try to establish a relationship amid family disapproval and personal assertiveness, then the book takes shape and the reader can finally settle into feeling more connected to the men and their struggle to be together.  Ty is “straight” so this reads as a “gay for you” story which I am not sure that I bought into.  Their initial sex scene came across the page as being somewhat polished in experience considering Ty’s inexperience.  I really thought the author did her best work with describing the family dynamics and religious beliefs  that threaten to tear the couple apart even as they are getting started.  That aspect of this story really highlights Samantha Ann King’s talents as a writer.  Tyler’s family comes across as real and absolutely believable in their bedrock fundamental religious beliefs even after  having evidence as to their love, especially his mother, for their son.  The stress that Landon is under during his first visit to Tyler’s family and the strained family dynamics are perfectly portrayed.  It’s sad,  and it has the feel of a family ready to break apart, splintering beyond any of the family’s power to heal the fractures about to be created.

Tyler’s change of face with regard to his sexuality and relationship with Landon is a little too pat, and the ending of this novel comes about a little too soon to feel authentic as well.  I liked this story but felt it had so much more potential than was evidenced in the final product.  I think Samantha Ann King has a gift that she has just begun to explore and I look forward to more stories from this author.  I liked this story but am on the fence as to whether I would recommend it.

Stories in the Lovers and Friends series:

Waiting for Ty (Lovers and Friends #2) 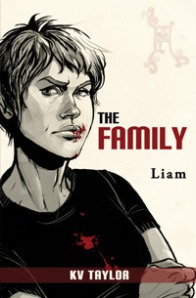 Liam Corchoran is not in a good place.  He is depressed and lonely, and older than most of the kids attending college for the first time.  A farm boy used to chores, family and friends, he is unprepared for the lifestyle around him and it doesn’t help that his college roommate is mostly absent, appearing occasionally in their shared room, only to disappear again shortly thereafter.  Liam falls easily into a circle of sex, alcohol, classes, drugs and depression, wondering why he feels so empty inside.

Gianni Fiorenza is Liam’s roommate.  He is also a century old vampire and a predator of the highest order.  The latest victim in his sights?  That would be Liam Corchoran, his roommate.  Something about that human intrigues Gianni which also pisses him off, so of course Liam has to pay. Soon, however, the game starts to turn into something more resembling friendship as Liam opens up to Gianni about literature, family and those things important to him.  But Gianni is a monster and he doesn’t do friendship, so even as things start to deepen even further, Gianni changes things permanently for Liam in a way that will reverberate through time.

These are not your sparkly, PG 13 vampires.  With Liam, the first book in The Family series by K. V. Taylor, we return to the vampires of true monster status, but with an updated twist.  I always have such high expectations of Taylor when it comes to her characterizations and here she exceeds them. And she has also done the same with her settings. This is not a universe of Rainbow Bright and Unicorns, but a much darker, malevolent place in which humans walk at their peril. I love how even a visit to a night club can turn from a simple night out into one of pain and horror in the hands of this talented author.

The characters of Liam and Gianni are wonderful dark creations, capable of quoting obscure literary passages, listening to everything from Verdi to rock, while expressing and feeling a range of emotions that sometimes has little to do with being human.  Gianni especially has that authentic feel of someone so removed from the human condition, elevated to true monster status that it is hard to connect with him as a character to begin with.  Instead, all feelings that Gianni will engender in the reader comes slowly, as he reveals more of himself to Liam over time, and the person he is  comes out in force, not just the predator but the man he once was.  Liam too is recognizably real and human.  Full of aspirations, binging on sex and alcohol to fill in those empty spaces within himself, we can understand him and the bleak place he is in. A place that Gianni manipulates beautifully for his own pleasure and hidden agenda. If this is a love story, it is not the one you are probably expecting.  It is a love story  certainly, but it’s participants are monsters and it follows that it’s their definition of love, not a human one.  That might be harder for some to accept.

Instead of humans being regarded as “love” interests or wonderful creatures, they are once more relegated to the status of food, so we understand immediately there must be something unusual about Liam to garner such interest from Gianni, the suave, arrogant vampire on the prowl.  But, like an onion, this story has so many layers, and they have to be peeled back before each new revelation can surface, bringing many tears to accompany a certain sweetness buried here as well.  There are some amazing side characters too that still stick with you, like Aldo and Madison and James, Liam’s brother.   But it is the haunting nature of human versus vampire and the question of what it is to really live and love that is addressed here, and it is done so in a manny you won’t soon forget.

Liam is only the beginning.  The rest of the series is listed in the order the author intends to write and release them.  I can’t wait to see what comes next in this remarkable series.   K.V. Taylor has created a website just for this series.  You can find it here. Follow my links and pick this right up from Belfire Press and Smashwords.   If you order by Feb. 21 (tomorrow) use this code for 20 percent off at Amazon and Smashwords (use code KC42D for 20% off through Feb 21). Kobo, Apple, Sony, B&N, and Diesel will be available in a few weeks.

As with all her novels, here is the soundtrack to go along with the story: