Winner Announcements for our Down Under Author Showcase Giveaways!

Yesterday, we announced the Down Under Scavenger Hunt Winners.  Today we are starting with the winners of our Author Contests:

A. B. Gayle:  Shirley Ann Speakman

Congratulations to all!  They have been notified!  More tomorrow!

“In the stillness of remembering what you had and what you lost.”

When Steve first meets Don, it’s under not-so-great circumstances. Don’s an arrogant Master, Steve is performing as Stevie and giving blow jobs to raise funds, and together they’re everything each other is trying to avoid.

But there’s a common, tragic thread tying them together, and despite Steve’s fear to fall into the trap he fought so hard to be free of, he’s drawn to Don, and Don to him.

These two apparent opposites can’t help but be attracted to each other.

People can cut in front of you in life too. Prevent you from being who you are meant to be.

So here’s the thing…

The issues that this book deals with are oftentimes not light or fun, but I was sucked right in and simply devoured the book. I’d actually enjoy hearing more about Rob, as he really interested me (or even Kieran. Ooh, now there’s a pair). Additionally, I would’ve liked to see more of Steve’s sister, as I felt she was a really pivotal person in his life, and yet her actual presence was a mere few pages.

Overall, this was a really great read that kept me interested from the very first page to the last.

Anne Cain did a great job on this cover. It captures Steve as a whole, and not just one part of him, and I certainly appreciate that.

Red+Blue is a novel of opposites. Ben is a young man, trying to spread his wings and find his way in San Francisco. From all accounts, he’s never really been in love, and he’s not afraid to go spend a night out on the town. Adrian, on the other hand, is older and established. He’s also Ben’s boss. He has had and lost love in one of the worst ways possible. Between society and family, Adrian’s deep in the closet, with no plans of even letting that door crack open.

The environment of this was perfect. I have some experience with financial types with my own work, and the set up felt of the office just felt so fantastic. One thing is for sure, this is that taboo boss/employee romance done right.

I also enjoyed the outline of the book. It’s split up in three parts, with the first being Red (Ben’s), the second Blue (Adrian’s), and the third a combination. It was unusual but really fitting. At first, when I got to the second part, I thought we were going to rehash everything in Red’s section all over again but from Adrian’s perspective, but it wasn’t like that (thank goodness). Parts were glossed over again, but it really more focused on Adrian in that same time period instead of every same interaction again from the different POV. It also came together really smoothly in the third section. There was no awkward breaking between these perspectives, making for a better read.

Unfortunately, I fear this book may have suffered from the “two day syndrome” that so ails me. A lot of the more emotional aspects were in the later part of section three, which I came back to on the second day. If I had the emotional connection with them, I had lost it by that point. Additionally, I wasn’t a fan of how their first actual sexual interaction happened. It lacked that spark of intensity for me, the surprise.

The writing was excellent, though, and the story good. All around an enjoyable read.

The cover art, done by Anne Cain is nice and simple. I think it does a nice job of showing the contrast between the characters, and of course, it features red and blue.

—-A.B. Gayle is one of Scattered Thoughts and Rogue Words Down Under Authors for January 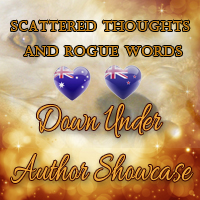 It’s Day 14 of STRW Down Under Author Showcase.  Today’s featured writer is A.B. Gayle from southern New Zealand.  Welcome, A.B.!    We have a wonderful interview with A.B. Gayle, complete with some pictures of her favorite places, discover this author through her books and bio!  Don’t forget to enter Gayle’s giveaway contest and search out the Down Under Scavenger Hunt word of the day!

New Zealand Fact of the Day:

The Legend of New Zealand: Legend has it that New Zealand was fished from the sea by the daring demigod Maui. Now Maui was no ordinary man.  Maui is the gifted, clever demigod of Polynesian mythology responsible for fishing up the North Island of Aotearoa, New Zealand.

After a miraculous birth and upbringing Maui won the affection of his supernatural parents, taught useful arts to mankind, snared the sun and tamed fire. But one of his most famous feats was fishing up the North Island.

Despising him, Maui’s four brothers conspired to leave him behind when they went out fishing. Overhearing their plans, Maui secretly made a fishhook from a magical ancestral jawbone. Then one night he crept into his brothers’ canoe and hid under the floorboards.

It wasn’t until the brothers were far out of sight of land and had filled the bottom of their canoe with fish that Maui revealed himself. Then he took out his magic fishhook and threw it over the side of the canoe, chanting powerful incantations as he did so.

The hook went deeper and deeper into the sea until Maui felt the hook had touched something. He tugged gently and far below the hook caught fast. It was a huge fish! Together with his brothers, Maui brought the fish to the surface.

Maui cautioned his brothers to wait until he had appeased Tangaroa the god of the sea before they cut into the fish. They grew tired of waiting and began to carve out pieces for themselves. These are now the many valleys, mountains, lakes and rocky coastlines of the North Island.

[Interesting side note:  This legend is extremely similar, for obvious reasons, to the legend of Hawaii and Samoa]

Australia Fact of the Day:

Dreamtime. The Aborigines believe that the world began during a mythical period called Dreamtime, or The Dreaming. During this time, ancestral beings that slept beneath the ground emerged from the earth. They created the landscape, made people, established the laws by which people lived, and taught them how to survive. After the ancestral beings’ work was done, they returned underground.

The Aborigines actively recall the events of Dreamtime. By participating in certain rituals, individuals can reenact the journeys of their ancestors.

Nourlangie Rock in the Northern Territory of Australia

Scattered Thoughts and Rogue Words’ Down Under Author Showcase continues this coming week, starting off with John Terry Moore, author of Black Dog, published through Dreamspinner Press.  I hope you all have been discovering new authors and great stories as the month progresses.  I know I have added immensely to my TBR pile and auto buy authors.

It is thought that Aboriginals have called Australia home for between 40,000 and 80,000 years.

It is estimated that at the time of British settlement there was about 300,000 Aboriginal people who spoke around 250 languages.

British settlers aboard the 11 ships of the First Fleet arrived in Botany Bay in 1788 but moved north to Port Jackson (Sydney Cove) a few days later when they found the Botany Bay site unsuitable. They arrived at Port Jackson on the 26th January 1788 (now Australia Day).

The number of convicts transported to Australia was about 162,000; they were transported in 806 ships.

About 98-99% of the convicts sent here were from England, Wales, Ireland and Scotland but some were sent from other British colonies like Canada and India, while others came from New Zealand, Hong Kong the Caribbean and other countries.

A lot of soldiers were also transported here for crimes like mutiny and desertion.

The Transportation of British convicts to Australia ended in 1868.

(Plus did you see those cool Glowworm caves in an earlier Fact? No, go back and see what you missed each day of the month!)

Our Schedule This Week At Scattered Thoughts and Rogue Words: