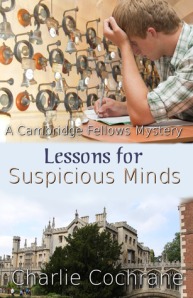 Jonty Stewart and Orlando Coppersmith have just returned home when they are sent a summons by Mrs. Stewart, Jonty’s mother.   Her old friend and Jonty’s godmother requires their assistance and immediate travel to her stately home in the country.  Although lacking details, Jonty and Orlando know this can only mean one thing…..a mystery to solve.  But this could not come at a worse time,, Orlando is still preoccupied over the revelation of his true family name and Jonty had made plans to help Orlando in his personal investigation.

But Mrs. Stewart is not to be denied and soon the two are traveling with the Stewarts to the Berkshires and Fyfield, home of Alexandra Temple.  Midway on their journey, a stop at Monkey Island sees the Cambridge Fellows with an unexpected request to look into a recent death there.  Orlando and Jonty keep that mystery to themselves but are surprised when asked to investigate a suicide at Fyfield, their destination.  That’s two recent suicides suspected to be murder, a circumstance that neither Jonty or Orlando believe to be coincidence.

For Orlando and Jonty, the deaths remind them of a recent dark time for Orlando and memories of Orlando’s father’s suicide.  There will be many mysteries to solve and personal obstacles to overcome before the Cambridge Fellows can return home to Forsythia Cottage and a life they love.

With Lessons for Suspicious Minds, Charlie Cochrane takes us back to England, 1909, a time period prior to the last two novels in this series. WWI is still years away although change is in the air and troubling events are occurring aboard.  Orlando is still reeling over the fact that he is not really a Coppersmith but a relation of the Italian Artigiano del Rame family and Jonty is making plans to help his lover investigate his grandfather’s identity.  But of course, even the simplest of plans go awry for our Cambridge Fellows as Cochrane builds some of her most sophisticated and convoluted set of mysteries to date for them to solve.

There is just so much to love and admire about this book. And l especially appreciate that, as the tenth book in the series, Charlie Cochrane takes us back prior to WWI and the events of All Lessons Learned (#8) and Lessons for Survivors (#9).  Once again we get to revel in the closeness and joy that is the Stewart family, from Richard, Jonty’s father always ready to join in as a spry co-investigator and the ever formidable Helena Stewart, Jonty’s mother, whose post pulls Orlando and Jonty into one of their most personal and perplexing cases  yet.  Lavinia, Jonty’s sister, nephew and brother in law are also present and enjoyably accounted for.  The Stewart family aspect of this series has always been a powerful emotional anchor for Jonty and Orlando’s relationship and sometimes even their mental and emotional stability.  That will come into play here as well.

A constant thread throughout this series has been Orlando’s predilection towards depression, an event usually brought on by thoughts of his dysfunctional family and his father’s suicide.  When Lessons for Suspicious Minds starts, we find Orlando in an unsettled state of mind.  He has just found out that his family name is not Coppersmith but an Italian one from his maternal grandmother as their true family name, Artigiano del Rame, is italian for Coppersmith.  Now the mystery before Orlando is that of the identity of his grandfather, a man never identified by his grandmother.  As always Jonty is trying to find a way to help Orlando but unsure of how to assist him.  This is such a marvelous way to start a story that will have further ramifications for both Orlando and Jonty, especially as they get involved in investigating two deaths categorized as suicides.

This is an emotionally fraught subject and Cochrane treads delicately but resoundingly here.  She brings back past events where depression almost pulled Orlando under and has the entire Stewart family just as unsettled as Orlando, unsure of how to tackle their concerns about his state of mind when dealing so directly with these recent deaths.  Then the author balances the tricky state of hiding the nature of Orlando and Jonty’s relationship from everyone at Fyfield, including the servants, just at the moment when Orlando is needing the love and support of Jonty the most.   It’s almost painful for them to part in the evening when all Orlando (and Jonty) wants is to curl up with his lover, feeling safe and loved.

Through ten stories readers have been there as Orlando and Jonty meet, romanced and finally settled into a deep loving relationship.  It has been a wonderful journey, filled with angst and joy. So we understand how far Orlando has come from those early stages to this point where he needs that physicality, that touch from Jonty to shore him up emotionally and mentally. And when they finally are able to sneak away and indulge in their need for one another, the reader feels as content and emotionally satisfied as they do.

A tenth book is always a milestone in any series and Charlie Cochrane does justice to this remarkable series by including all the elements that her readers have come to expect and enjoy and elevating them here in Lessons for Suspicious Minds.  There is the marvelous parlance of the time period that Cochrance includes in her dialog which demonstrates an ease and familiarity of language in use then.   Whether it is Jonty calling Orlando “a big jessie”, with total affection of course, Richard remonstrating “Helena, he’s built like a bull of Bashan.” after Jonty’s mother says he is “looking a touch on the thin side.” Or even Jonty asking “What have you planned in the way of a nosebag?”, it natural, instead of strained or unusual.  It just adds that note of relevance and accuracy necessary for a historical novel, albeit accomplished in a lovely and subtle manner.

Her locales ring as true as her dialog.  I would love to punt my way to Monkey Island and spread a cloth under the trees to nap away a hour or two in the afternoon. Cochrane’s descriptions are both informative and a calling card for that geographical area. Their pull is hard to resist and sent me googling Monkey Island, punts and gardens Cochrane so vividly brought to life.

And then there are her mysteries, two of them in fact.  To use the lingo common in fiction, there is a dastardly aspect to these cases that I was not prepared for. Its complex and it takes time for Jonty and Orlando to pull all the facts together before they can solve the crimes.  The clues are myriad and include such marvelous things as servants bells and mariner journals. Just outstanding, I think this is the best mystery yet.  I loved that I did not guess at the solution, didn’t even come close!

But the true heart of this story and the series is the love between Orlando Coppersmith and Jonty Stewart.  It has survived Orlando’s innocence, Jonty’s childhood sexual abuse, and all the events of their past investigations, including death threats , threats to the romance, and the threat of discovery. I was slow warming up to their romance but as the stories flew by and their relationship progressed, I fell for them as deeply as they fell for each other.  Now I number this series and couple among my all time favorites.

Lessons for Suspicious Minds (Cambridge Fellows #10) is one of the best of the series, a marvelous thing to report at book ten.  This series and their romance is alive and getting resoundingly better with each new story.  How many series can say that at book ten?  If you are new to the Cambridge Fellows series and Jonty and Orlando, then rush back to the beginning and the start of their romance.  But if you are a long-time fan as I am, then you will surely be as in love with this story as Jonty and Orlando remain with each other, exchanging gentle slaps and retorts to go along with the double entendres and hidden caresses we love and expect.  I consider this one of the best of 2013.

Cover art by Alex Beecroft is perfect for this story in every way.

For those of you for whom this review is your first introduction, please start from the beginning. Take your time getting to know these remarkable men, delve into life and times of England in the 1900′s. It starts out with all the joys of a slow promenade and then picks up the pace with each succeeding book.

It is an extraordinary journey. Dont miss a page of it. Here are the order the stories were written and should be read to fully understand the relationships and events that occur:

For free stories in the Cambridge Fellows Mysteries universe and more about the author, visit the author’s website.