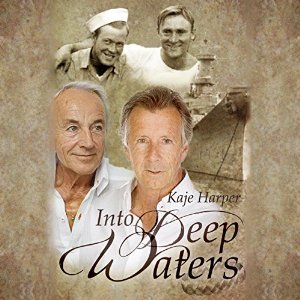 For Jacob and Daniel, two young gay men aboard a US Navy ship in WWII, the risks are high. Not only the risks of injury and death from Japanese planes and submarines, but the risk of discovery. Only a special kind of love is worth taking that chance. But from the moment Daniel meets Jacob’s eyes across a battle-scarred deck, he knows he has to try.

Being together requires figuring out what it means to be gay in an era when they could be discharged, imprisoned, or worse for admitting the desires of their hearts. Their relationship is measured in stolen moments and rare days of precious leave, with no guarantee there will be a tomorrow. And, if they survive the war, they will need even more luck to keep their love alive through the years to come.

This story was originally written from a prompt and photo submitted as part of the Goodreads M/M Romance Group’s Love is Always Write event in 2012.

This book blew me away. It’s an touchingly beautiful story of an enduring love that spans over a period of sixty years. While it begins and largely takes place during WWII, the last third of the book carries us through the rest of out heroes lives, touching briefly on important events like Stonewall, but mostly letting us watch as these men deal with things like post-war trauma, family acceptance, workplace concerns, coming out, births, adopting a cat, and all the small and large changes that personal and physical relationships goes through as we age. An amazingly real, believable, and relatable story. Bravo.

The book itself was a wonderful free gift from a talented writer, but I’m very glad she decided to take it a step further and put it into audio. I’d been meaning to read it for a while but hadn’t gotten to it. Since I listen to audio every day while driving and hiking with the dogs, I snapped it up right away when the audio came out. For those who enjoy listening to audio, don’t hesitate on this one. It’s one of the most worthwhile audible credits I’ve used lately.

Kaleo Griffith did an excellent job with the narration, most notably in bringing to life the emotion that this story so richly deserved. While the two men’s voices are not as vastly different as on some audios, I enjoyed the Jersey accent he used for Jacob very much. It fit and wasn’t at all overdone. And he did an outstanding job of aging the voices as the main characters matured and grew old.

Some of the scenes in this book are still stuck in my mind’s eyes weeks after reading, especially the scene in the ocean after the USS Gageway sinks. The author’s use of description read so incredibly vivid, I’d say it was like watching a movie except it really was more because not only did we see and hear, but I could taste and feel as well. Rarely have I felt so immersed in a scene whether in print or on the big screen.

Despite being set in wartime and feeling realistic, the author didn’t go overboard on angst, nor did she hype up the gore for the shock or thrill factor. Overall this was a heartwarming tale that spoke to me of destiny, of finding that one person and going through all the good and bad times, of nearing the end and looking back with joy on a life well-lived. And well-loved. This story is a gem, a treasure. You owe it to yourself to read it.

The author, Kaje Harper, generously agreed to answer a few questions which I was curious about, and which I hope you will find interesting as well.

BJ: What motivated you to bring one of your books into audio? Why did you choose Into Deep Waters?

KH:I’ve heard readers talking about how much they enjoy M/M in audio format. They apparently listen to audiobooks during work commutes (although the thought of hitting an angsty Amy Lane scene while cruising the freeway or on a public bus gives me a little pause. Maybe I’d stick to Eli Easton for those.) I can really see the appeal of audio while exercising or doing chores, or to rest your eyes after a day staring at a computer screen. But my pro publishers aren’t offering my books that way yet.

So I thought, why not try it with one of my self-pubs? It was hard to decide which one. Many of them are free novels, and I wasn’t sure if people would pay for an audio version of a freebie. Then… should I start with a favorite, or learn the process and make any initial mistakes on a book I didn’t care as much about?

In the end I picked my favorite of my own stories – “Into Deep Waters.” It’s a short novel, it has good reviews, there’s emotion that a skilled narrator could bring to the surface. And if I only do one, if the logistics aren’t there for another, then this book is the one I wanted to have in audio. This book, which is my tribute to the LGBTQ Americans who lived and loved through the decades past, and helped shape the acceptance that is building now in my children’s time.

BJ: How do you feel about the final audio? What was your own reaction upon listening to it?

KH: I love the final result. It was hard choosing a narrator. I had excellent auditions from some wonderful narrators, including guys who have a great following among M/M listeners already. But when my friend and producer, Jonathan Penn, and I heard Kaleo Griffith read the audition script, we agreed that he took the emotional passages of the story to a new level.

It’s funny – I don’t usually get caught up in the emotion of my own stories as I write them; I’m more on the outside, finding the words for the feelings. And definitely with a story I’ve edited a dozen times, I don’t expect much impact. But when I listened to “Into Deep Waters,” interpreted and intensified by Kaleo’s performance, I actually laughed and got choked up. At my own words! It was as if his reading made them fresh again for me. I hope others have the same response to it.

BJ: Do you plan to bring more of your stories into the audio?

KH:I hope so. It was fun to hear my words given new life. It depends on how this book sells, though. There was a fair bit of up-front investment, in time and money, to get a great narrator and produce the book. With luck, if it appeals to readers, then I’d love to do others. Some of my best-known books, like “Life Lessons”, are contracted to the publisher, but I have several novels that could be taken to audio as a self-pub release, if it seems like the demand is there.